Whoever disturbs the peace of Uganda will perish- Museveni 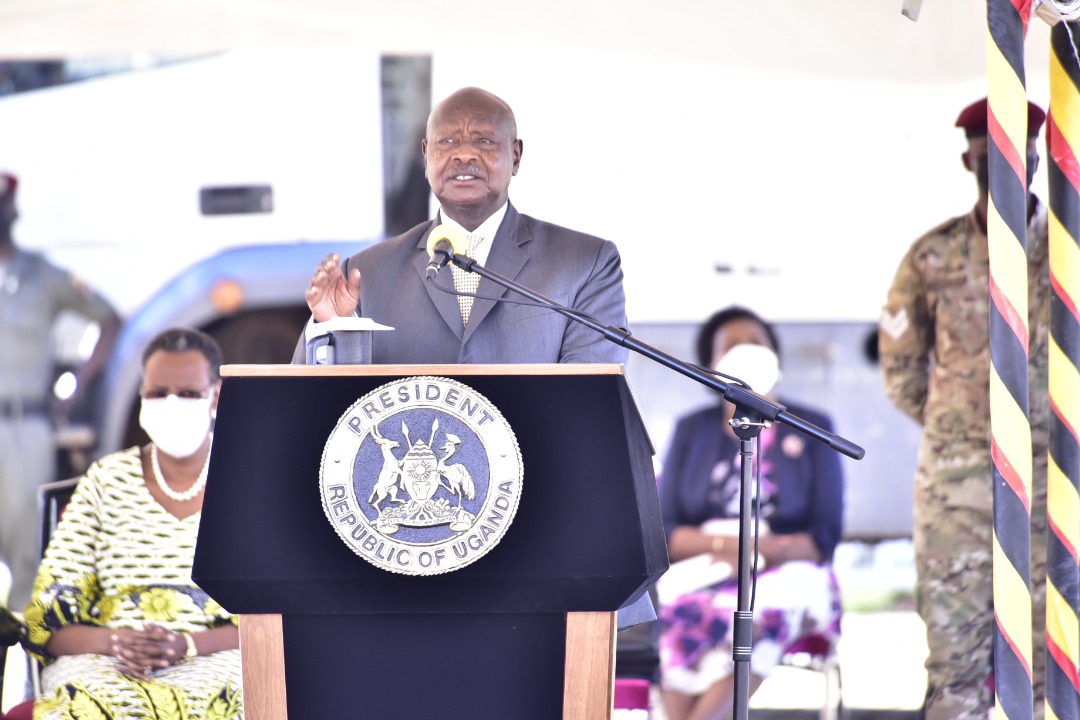 President Yoweri Museveni has vowed that nobody will disturb peace of Uganda and anybody who tries will perish.

“Nobody will disturb the peace of Uganda. Anybody who tries will perish because the army is strong,” the President said referring to the recent twin bombings in Kampala that left seven people dead including the 3 terrorists who blew themselves up.

The President said the problem is some confused youth who have been radicalized and some neighbouring countries who can’t control their affairs. He also cited the poor internal intelligence sector in towns, which has lagged behind.

“Internally, we have lagged behind about intelligence in towns to discover who is planning and where it is happening.

“The terror has shifted from the rural areas to towns where there are bigger populations and many buildings. Security in town is intelligence based. We have moved very well so far. We have got videos of those who had the bombs because of the cameras. Now we need to do more. Cameras are eyes, I have heard that you can also put noses in the cameras (Install sensors) which can smell the bombs and send an alert. The idea that they can be on the street is a good one. These terrorists, we shall finish them. They are wasting their time, they will be defeated,” he said.

The President was yesterday presiding over the pass-out ceremony of 443 tank crew personnel who have been undergoing a one year training at the Karama Armoured Warfare Training School in Kabamba, Mudende district.

On arrival at Karama, President Museveni received a briefing from UPDF generals before watching a demonstration by the newly graduated tank crews exhibiting their skills.

“Things are moving. I congratulate the grandaunts. Despite Corona, which locked us all up, you mastered your own skills. All the targets where hit. I am glad the training adopted the core principles of UPDF of minimizing wastage. He commended the commanders and trainers for cultivating indigenous armory studies.

“You have shown that you can train other Africans in armour. I congratulate you for discovering your real potential and for embracing the economics. There is a lot of wastage in training using live ammunition. It is costly and wears out armour. But now you are enlightened and used simulators and special ammunition. You have made professional training affordable,” he said.

He commended the trainers for introducing to the trainees the concept of combined arms during an operation such as ; air-force, field engineering, motorised infantry fighting vehicles, intelligence, to avoid exposing them to the dangers of “food without sauce”.

Don’t say I am an armour professional and will rely on arms. Food must have sauce, water to wash it down. Even in fighting, you cannot fight with only arms, you need the Air force, field engineering, infantry, intelligence etc,” he said.

The President commended warfare school for following his instructions on infrastructure development at the school by building dormitories, classrooms and a pavilion for them to congregate and said they will consider building the electronic range ground.

He commended the Karama Armoured Warfare Training School and the Kabamba Military Academy for preserving the environment and directed the institutions to put down as a Generals order that trees thereon be preserved.

“I want to thank you for preserving the environment. That word Karama means a place of Mirama, small strong trees with deep roots adapted to save the environment,” he said.

The President said since 1979 the grounds have had emigavu or emiisa, and now have pine etc which are very good nitrogen fixing trees with hardwood and must be preserved.

“Give it as my order that nobody should cut those trees because they are indigenous,” he said.

President Museveni congratulated the graduates upon completing their course and urged them to look after their health to avoid getting HIV/Aids, Covid 19, Sexually transmitted diseases, being disciplined, and being patriotic and the rest will follow.

Lt Gen Wilson Mbadi the Chief of Defence Forces applauded President Museveni for professionalizing UPDF and urged him to continue with capacity building UPDF through training them. He congratulated the graduates for completing the demanding course and advised them to use the attained skills at the ripe time to be executed.