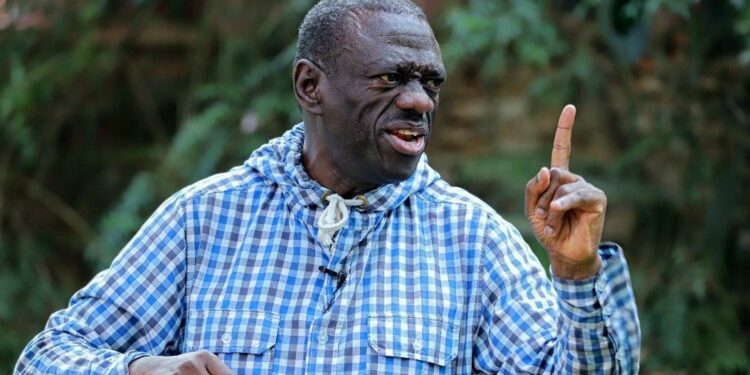 In a social media statement issued on Wednesday, Besigye said the insecurity and violence in Uganda, which is an ever present threat, is not, primarily, a National Security (threat to Sovereignty) problem; but rather a Human Security problem.

Here are the three main drivers of violence and insecurity witnessed in Uganda as stated by Besigye, a four time presidential candidate:

1. The “Failure To Thrive” crisis that the PFT crystallized recently. This is mainly underpinned by State Capture and the ensuring policies which create and perpetuate political, social, cultural and economic injustices. Long-standing injustices have translated into Poverty; Youth marginalisation , unemployment and exclusion from opportunities for self-development; Disease, Hunger and Ill-health; Environment degradation that’s intensifying poverty, migrations and nomadism; unplanned for population growth etc.

The frustration, desperation and anger that has brewed from the above injustices become expressed through the formation of violent insurgent groups that fight the State coercive forces; non-violent political resistance; gangs that’ll terrorise (rob, extort, blackmail etc) people for their “survival”; and escalation of petty crime.

In Uganda, all these forms of expression are present. The response of the NRM/M7 Junta to all of them is the same- get more guns to “CRUSH THE PIGS”!

The anger and hopelessness from the injustices lead to degradation of confidence in one’s own worth or abilities; self-esteem; the sense of having nothing to lose; and can foment suicidal tendencies. Many young people have been killings themselves; including, by self immolation! These are HUMAN BOMBS waiting for a detonator.

No amount of cameras and other technological gadgets can stop them.

2. Dysfunctional Security Systems: In spite of the great hype and projection of Uganda’s security systems as being robust and efficacious, the reality is different. Much, much more could be achieved with much fewer people and resources. This is due to pervasive corruption (financial, manpower development & deployment); poor facilitation; intrigue & conflict between Secuirity Orgs; politicisation of security Orgs etc.

This is why the Security Organisations are, themselves, high up on the list of suspects in most cases of insecurity and violence. It’s believed that some can cause violence and insecurity to attract “operational funds”; to cast a sister organisation in bad light; or to eliminate political or job rivals etc.

Promotion and appointments in Security Organisations has been, primarily, based on blood relations, loyalty to individuals and cronyism; rather than, knowledge, skills, experience and patriotism. This is because these Organisations are meant, mainly, for Regime security, rather than Human security. This, inherently undermines the efficacy of the Organisations.

3) Regional military adventurism is a major factor in the generation of the huge numbers of refugees that have been powering into Uganda- especially, from Sudan and DRC. Some of these “refugees” enter with guns or with experiences in violence that they can share with citizens. They also add onto the tension over scarce resources.

It should be very clear that the Human Security Crisis is a part of the general National crisis Uganda finds itself in.

We shall not get out of this crisis by anything short of a fundamental RESET of the State.
The NRM/M7 Junta must be brought to an end and a TRANSITION to a new (citizen based) democratic State; where all citizens enjoy full and equal rights and opportunities, under the rule of law.

That’s why all who’re oppressed and marginalized citizens must quickly pull together and actively resist and end the Junta rule.

ANDREW MWENDA: My theory of Kampala’s bomb blasts, I don't believe that yesterday’s explosions were by suicide bombers