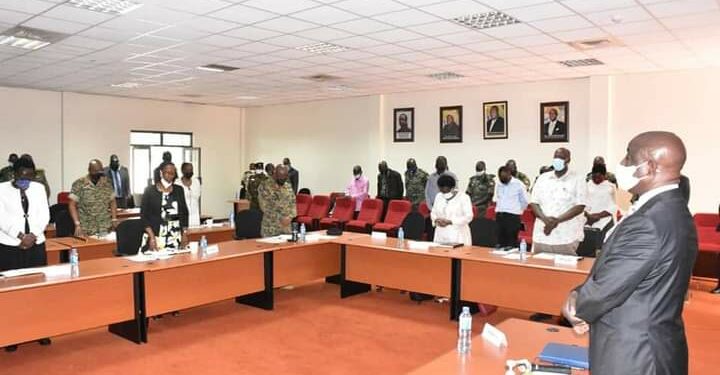 This was during the meeting held at Ministry of Defence and Veteran’s Affairs headquarters in Mbuya, intended to create solutions for sustainable security and development in Karamoja region.
Hon Sempijja hailed UPDF for the role played in enhancing security, stability and social economic transformation of Karamoja region.

“ I salute UPDF for recovering guns from warriors and bringing back stolen cattle to rightful owners,” the minister added.

He said that the launch of disarmament operation code named “ Usalama Kwa Wote” has helped government recover many illegal guns which has improved the security and stability in the region.

Minister Ssempija also stressed the need to transform the region into one of the economic booming regions in Uganda by improving livelihood of people through Operation Wealth Creation (OWC), disarmament, Parish Development Model (PDM) and other government programs.

He encouraged leaders to support Parish development model for the benefit of Ugandans and work as coordinated team to pacify the region.

The Minister for Karamoja Affairs Dr Maria Goretti Kimono Kitutu , in her presentation said there is need to strengthen regional integration and cooperation as a means of addressing cross-boarder raids, conflict and illicit Arms trafficking and facilitate cross-boarder trade.

She noted that there is a need to review and make efficient the current service delivery mechanisms to ensure they are fast and relevant like priotizing Karamoja region for infrastructure development programs under Health, Education, Works, Water and Agriculture sectors among others.

Dr. Kitutu also revealed that Civil Military Cooperation (CIMIC) should be strengthened. Adding that this will improve relations with elders, religious leaders, youth and women organisations, peace committees, and other relevant stake holders.

In her concluding remarks, she said peace and development are two sides of the same coin adding that there can be no peace without development and there can be no development without peace.
“It is our historical mission to transform Uganda from a subsistence economy to a modern, peaceful, industrial and transformed society by unlocking Karamoja’s vast potential in order to beacon a new era in it’s history as we move towards Vision 2040.

The Chief of Defence Forces Gen Wilson Mbasu Mbadi said there’s heightened security in the region and this has led to peace and stability. He called upon other stakeholders to work with UPDF effort in order to establish peace for social economic transformation in the region.

Gen Mbadi urged for mindset change because of the Karimajong’s cultural, traditional and geographical location. He also thanked leaders of Operation Wealth Creation for the role played in transforming the Karamoja region and the whole country at large.

The Chairperson for Karamoja Parliamentary Committee Remigio Achia thanked government of Uganda and Uganda Peoples’ Defence Forces for the deployment in the region which has stablised the region.

DENIS JJUUKO: How to avoid having money in dormant bank accounts