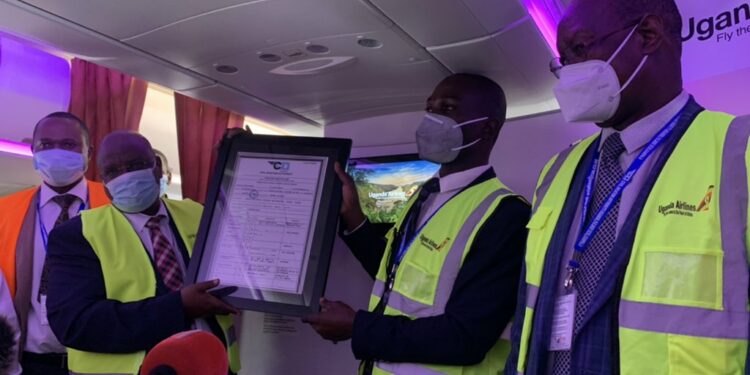 The State Minister for Works and Transport Fred Byamukama has called on Ugandans to support Uganda Airlines.

The ministet made the plea on Monday while officially handing over the Air Operator’s Certificate (AOC) to Uganda Airlines and Uganda Civil Aviation Authority (UCAA).

In the ceremony which was conducted within the Aircraft at Entebbe International Airport, Byamukama said that Uganda Airlines is a newly born baby that needs support from each and every Ugandan without any political discrimination.

“I want to ask Ugandans and the entire media fraternity that supporting Uganda Airlines is the only thing we need to do together as a country because if we do it, it will grow and our sisters or brothers will have jobs. As other countries have supported their National Airlines let us now do the same. Securing the AOC certificate is a great achievement which means that the Airlines’ generation of income to the country is going to increase because now we have the longer routes by the Airbus,”the Minister said.

He added that receiving the AOC is a great milestone because it signifies the continued growth of the Airline in the Ugandan Aviation industry.

The inclusion also opens Uganda’s routes across continents with the official launch route being Dubai in October 2021. Other international and long-haul routes such as London and Guangzhou will follow.

With this AOC inclusion, Uganda Airlines is now formally approved to carry Cargo and Dangerous Goods. This is of particular importance to the growth of trade and commerce in Uganda as it opens channels for the transportation of Cargo both into and out of Uganda.

The certification of the Airbus on the AOC has been a concerted effort by all Airlines’ dedicated staff members across all disciplines. Passengers will get to experience a new experience due to innovations from the Commercial and IT systems which can be seen through the Airlines’ new website and improved communications solutions across the entire network.

According to the Airlines management, the Airbus A330 is a state-of-the-art aircraft with competitive features to make travel enjoyable and comfortable. Some of the unique features on the aircraft include fully lie-flat seats for the Business class, onboard Wi-Fi access throughout the aircraft, a state-of-the-art inflight entertainment system with lots of blockbuster movies and increased legroom for all classes.

After securing the AOC certificate, the Airline will now turn its efforts to the Self Ground Handling initiatives and the Phase-in of the Uganda Airlines Approved Maintenance Organisation.

All these are intended to give the shareholders of the Airline an efficient cost-benefit for the entire investment by running all functions in-house.

The Pilots, Cabin Crew and other operational staff have undergone rigorous training to international Aviation Standards and have been vetted as applicable by the regulatory partner in the industry the Uganda Civil Aviation Authority.

The Acting Director-General of UCCA Fred Bamwesigye confirmed that acquiring an AOC certificate shows that Uganda Airline is ready for serious business. However, he noted that acquiring such certificate the Airline had to go under vigorous processes to ensure that it has reached the required standards.

“It has taken us some long time to acquire this certificate because the Airbus is a new technology and we had to ensure that we certify every step since the safety of our customers is our first priority. CAA is pleased to see that Uganda Airline is now free to compete with other national airlines.”

Hundreds turn up for LDU recruitment in Kisoro