by Stephen Kalema
in News, Politics
59 4 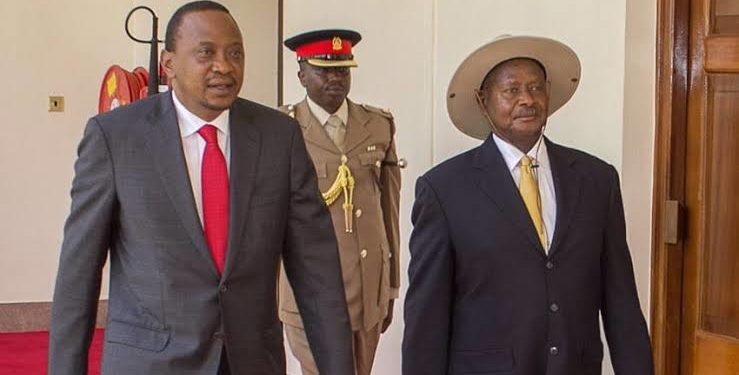 The Former Senior Presidential Press Secretary Joseph Tamale Mirundi has revealed that otherthan the William Ruto fight, there’s a hidden secret as to why  President Yoweri Museveni and his Kenyan counterpart Uhuru Kenyatta are feuding.

During an interview with TMO Youtube channel a few days ago, Mirundi said that the Kenyan side is fearing that if Ruto works with Museveni and wins the next Presidential elections, Museveni will have higher chances of being the First President of the East Africa Federation (in case it materializes) , something which Kenyatta doesn’t like.

“Because Ruto is popular and Raila Odinga has stood for five times, this gives Ruto a chance to win that is why Uhuru is accusing him of insubordination. To defeat Ruto in the coming election would be hard that is why Uhuru is blackmailing him before Kenyans by telling them that his DP is allying with Museveni who wants to rule over East Africa,” the political analyst said.

He added that Kenyans are fearing President Museveni to intervene in their politics because if Ruto wins it will give President Museveni a green card to be endorsed by Ruto as East African Federation head thus leaving Uhuru aside.

Two weeks back, Kenyan authorities refused their Deputy President Ruto from flying to Uganda on the allegation that he did not inform his boss president Kenyatta about his trip.

A section of Kenyan Members of Parliament belonging to the Orange Democratic Movement (ODM) led by Junet Muhammad also came out and condemned DP Ruto for allying with President Museveni whose party National Resistance Movement (NRM) has kept him in power for a long time which is contrary to Kenyans ways of leadership.

“Please revise your relationship with NRM, that is a party that has kept someone in the Presidency for three decades, so are you also planning to stay for three decades? Ruto’s alliance with President Museveni is aimed at disrupting this country. Every sensible person knows that NRM has never won any competitive and democratic elections what Museveni knows is how to destabilize and grab power and so Ruto cannot claim to go to Uganda and learn on issues on how to win elections.”

Responding to their claims, the NRM Secretary General Richard Todwong said that it was unfortunate that the Kenyan MPs made statements that undermined the spirit of cooperation and brotherhood between the two countries.

“We promote and are committed to the East African Treaty that encourages sovereignty of countries and non-interference in the affairs of other countries. We respect the independence and sovereignty of Kenya as a country and we appreciate the continuous cooperation between our leaders and people.”

MILLY BABALANDA: Emyooga programme should not be left to die