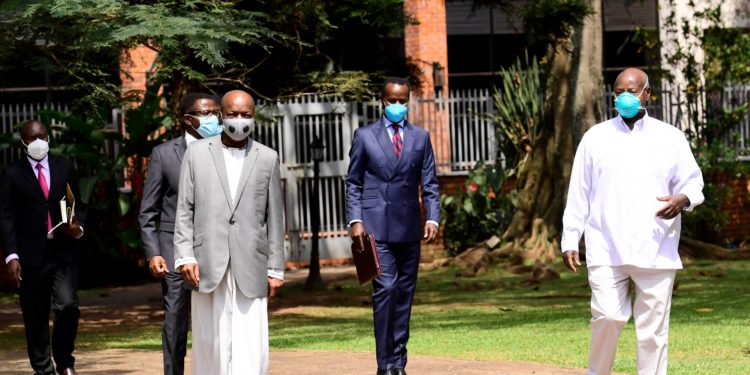 During the meeting, President Museveni and Kabaka Mutebi discussed development matters of mutual interest between the Kingdom and the government.

The two leaders later briefly exchanged pleasantries, both acknowledging that they have taken long without meeting, before going in for a closed door meeting.

The Kabaka of Baganda was accompanied by a four-man delegation including Prince David Wasajja and Katikkiro (Prime Minister) in the government of Buganda Charles Peter Mayiga.

“Held a meeting with His Majesty the Kabaka of Buganda Ronald Muwenda Mutebi II at Nakasero State Lodge. His Majesty was in the company of Owek. Charles Peter Mayiga and Prince David Wasajja. We discussed matters of mutual interest,” Museveni tweeted yesterday.

The development comes at a time when Central government and Buganda Kingdom are conflicting over the validity of mailo land tenure system.

Museveni has since moved to make reforms on the tenure system.

However, speaking at his 28th coronation anniversary ceremony held at Nkoni Palace in Lwengo District on Saturday, the Kabaka said it is appalling that whereas other areas too have land, it is only that in Buganda being targeted by different people.