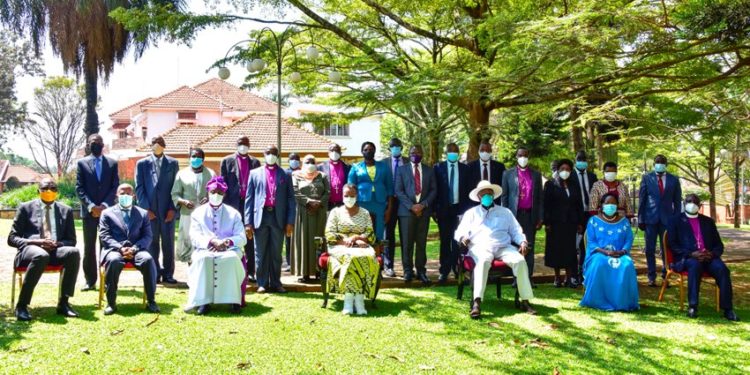 STATE HOUSE, ENTEBBE: Busoga diocese has agreed to hand over Busoga University and its assets to government as a public institution after a series of meetings that will now see government take over its 15bn shillings loan, all university land without any encumbrances and the court case withdrawn without any costs to both parties.

The President had sought assurances that the take over was on condition that the land was free in perpetuity and that the debts were legal.

President was today meeting the committee on Government take over of former Busoga University that included former Speaker of Parliament and Minister for East African Affairs Rt. Hon. Rebecca Kadaga, Dr. John Chrysostom Muyingo, the Minister of State for Higher Education, Bishop His Grace Bishop Samuel Stephen Kaziimba Mugalu and Protestant Bishops. The meeting was also attended by the First Lady and Minister of Education and Sports Janet Kataaha Museveni.

Busoga University was founded by Busoga Diocese in 1998 with its headquarters in Iganga District. However, in 2017, the National Council for Higher Education revoked its license following allegations of having unqualified students and lecturers and running illegal study centres and unaccredited courses.

“We must solve a few issues. We must get the land free, in perpetuity. I don’t don’t want to hassle. Give us the land so that it is government land. We don’t want to buy or rent, because there is no reason to do that. Secondly, there were some debts which of course we shall pay if they are legitimate debts,” he said.

“In Busoga we are going to build a public university there. We have started with Namasagali. As we were planning that, the idea of taking over this private university was started by people there. I have no problem with that,” he said.

“We shall pay the debts when we know what the money was used for. If this money was spent on public efforts and if the Auditor General confirmed, we pay and take over. Public universities are very good stimuli for development. Like Gulu… see how much it has stimulated growth. That is why anybody interested in developing the area should encourage this.

The President said government would build a Marine Institute for engineering and operations at Namasagali.

“We want to have a marines institute. When we want to train marine people, they go to Dar es Salaam in Tanzania or Mombasa in Kenya. I want Namasagali to concentrate on Marines training. The other campuses, we shall develop courses which we know are marketable. If we have agreed on land, audited debts and removed the case, all issues are now settled,” he said.

Bishop Kaziimba Mugalu said as a Church, they agree with position brought forward by retired Bishop Stanley Ntagali and the board of trustees.

“We agreed that the land should be put to good use. We are in agreement that it should be taken free by government,” he said.

The committee assured the President that they engaged Busoga University limited on the issue of the court case and agreed that it be withdrawn and each side pays own costs.