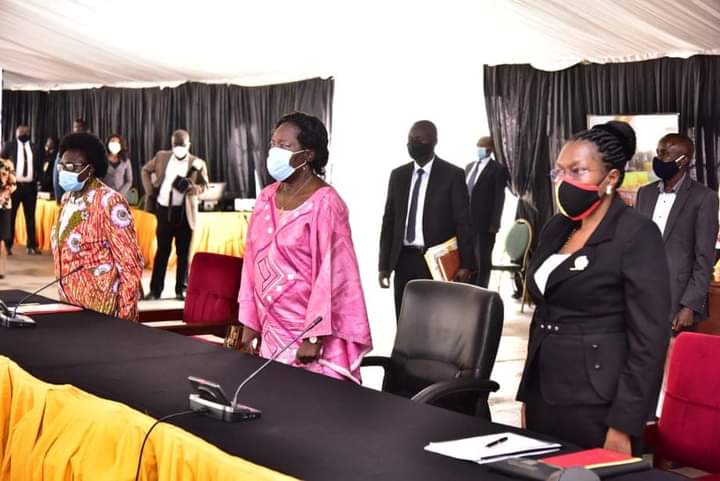 Speaker Kadaga (middle) during the Life after Parliament seminar on Thursday

The Speaker of Parliament Rebecca Kadaga together with the National Director of SOS Children‘s Villages Uganda Olive B. Lumonya have asked the outgoing Members of Parliament to maintain the dignity of honourable outside office.

Kadaga said this on Thursday as the Parliament was seeing off the members of the 10th Parliament. She informed them that it is possible to have a better life after Parliament.

“What are the characteristics of that life? We need to find ways of navigating this new life,” The Kamuli Woman MP-elect noted.

As it is a practice, on one of the last days, Parliament holds an orientation seminar to the outgoing MPs to prepare them for the Life after Parliament.

While addressing the outgoing members the keynote speaker, Ms Lumonya asked members to first address themselves that they are no longer active Members of Parliament but they should protect the title honourable as a sign of respect they were once members of the most dignified House in Uganda.

“Take time to read and be informed. You should be the person with the knowledge. Be reliable; You have to safeguard the title of honourable by the way you do things. The task you now have to rebrand yourselves,” she said.

Ms Lumonya also asked them not to stop working for the people but to continue inspiring the communities where they come from.

“You are now more informed as far as the government works than the people you are going to meet wherever you go. Therefore as you start your journey after Parliament use the knowledge of the awareness you have accessed in the last period of five years to lift others.”

Albert Charles Oduman, a former MP Bukedea County also asked members to accept that their tenure is done and stop fighting the situation.

“Good news is there is life after Parliament. You have to be decided and purposeful on what you will be out there. Don’t fight this situation. It has come, it is here and it is real. Recognize that you are no longer a member of parliament. Don’t accept sympathies or self-pity,” Oduman said.

All MPs of the 10th Parliament will receive plaques and certificates for their distinguished service during their tenure.