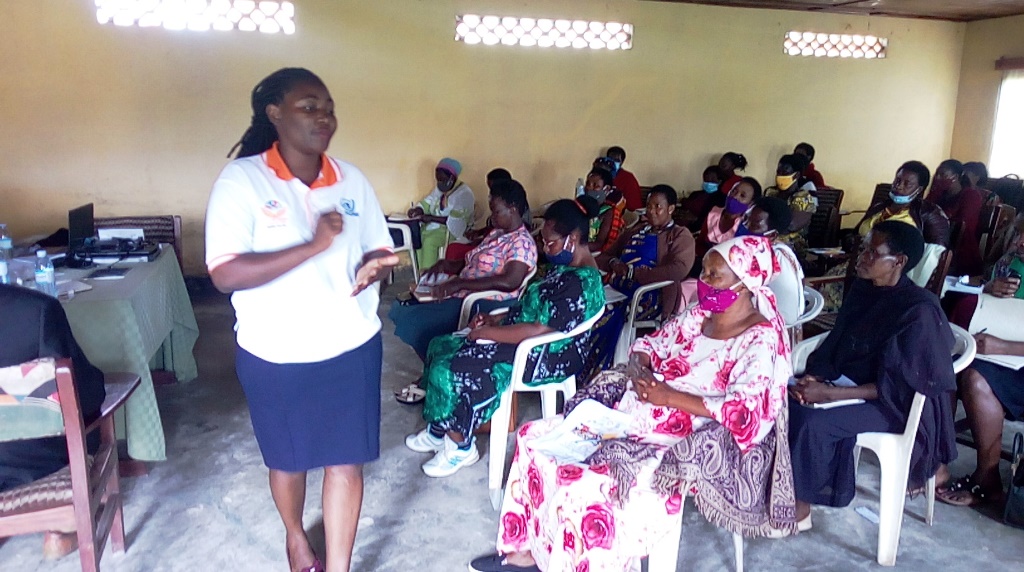 Lillian Namirimu ED All in One Women's Association during training at Belsom Hotel Ntungamo Municiaplty.

Women groups have been warned against being used by sculupulious people aimed at vanishing away with the groups’ funds.

According to Turyatunga John the Ntungamo District Community Development officer, most of the women’s groups are targeted by such people with ill motives after realizing that their groups are successful and trusted.

Turyatunga says due to the fact that women are more trustworthy and transparent, it is easier to solicit funds from donors whenever their groups are presented.

He made remarks on Wednesday while officiating at the training of 45 women’s group chairpersons and representatives with in Ntungamo District held at Belsom Hotel Ntungamo Municipality organized by All in One Women’s Association (ALOWA) under theme “Together Women Can” in conjunction with United Nations Democracy Fund (UNDEF).

Turyatunda advised women who are forming groups to be vigilant and inquisitive in dealing with people whose motives are not specified and not registered with Districts of jurisdiction.

He asked them to always be selective in elective leaders of their groups based on one’s financial discipline rather than riches one has and avoid bickering if they are to realize success.

Turyatunga commended the All in One Women’s Association (ALOWA) for training on how to form groups intending to curb poverty at household level saying it was overdue.

The Executive director All in One Women’s Association (ALOWA) Lillian Namirimu appealed to the women not to depend on their husbands but engage in lucrative ventures like vocation skills as the only way to achieve economic justice is to be achieved in the country.

Namirimu revealed that All in One Women’s Association (ALOWA) is to empower over 6,000 women in 33 district of Uganda to act against political, economic and social decisions that affect their lives by raising awareness of their gender specific rights, promoting women’s political participation as well as addressing all forms of injustices that affect women’s wellbeing.

All in One Women’s Association (ALOWA) is an association of women and women’s groups and organizations in Uganda since 2004 in order to strengthen grass root women’s groups to promote and protect civic space in Uganda.