From grass to grace: Businessman Sudhir narrates how he made his billion dollars

“When I came in 1985 June; July the first coup took place at 12.30 in the afternoon, soldiers started coming into our country the whole capital everything closed overnight. Within hours looting started; I have never seen anything like that in my life,” he says. 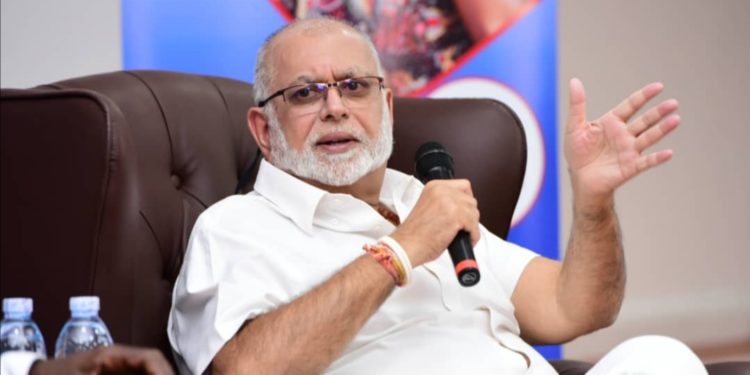 Dr Sudhir Ruparelia is one of the most successful businessmen in Uganda today and arguably one of the richest men in Africa. He has interests in banking, real estate, hospitality, media, floriculture, insurance and education.

Sudhir explains how he has managed to evolve from an immigrant doing odd jobs in the UK in the 1970/80s to building a thriving business empire today based in Uganda.

When former President of Uganda Idi Amin expelled Asians from Uganda, Sudhir left for UK and that’s how he started chasing his dream of becoming rich.

“My colleague and I were going to see a friend in London and found out, when we got there, he had gone to a wedding. In those days you didn’t have cell phones to message people. So, we were stuck there with not enough money to go home. We had one pound fifty between us. We decided to get food so we could stay warm – I bought two hamburgers – and then we wrapped some cardboard around us and bedded down on the street for the night. This was the 1970s, different days, no one said anything to us; all we got was a funny look from the postman in the morning!”

A sign of a billionaire happy in his own skin and comfortable with his humble beginnings. He pushed supermarket trollies in London for a few pounds a week and burned his fingers in search of a buck.

“I went to work in a bakery I worked two nights a week Friday and Sunday night. One of the things, when you are a newcomer, they give you the most difficult job. So, what would happen is these doughnuts are fried and they are dropped. Now you see doughnuts is what you had those days was plain doughnuts, or with jam. You had to pick up the hot doughnuts out of the fat fryer and inject jam into it while it is still hot. By the time you come in the morning your hands are all red with heat and hot oil. It is a part of an experience that I cherish, it may have been hard at the time and difficult but it helped me,” Sudhir recalls.

“I did various casual jobs in factories, supermarkets, butcheries and many other odd jobs, while studying in the evening until I finished my A’level. I made some good money and bought my first house in the UK as early as 1975. I continued working and living there until 1985 when I returned to Uganda.”

Sudhir and Jyotsna – also a refugee from Uganda – married in 1977. Jyotsna qualified as a banker and to this day oversees the finances of the family-owned Ruparelia Group that spans property, insurance, foreign currency trading and flowers.

“My wife, after school started working at Midland Bank (now HSBC), I was the hustler, hustling with different things. I think we did 15 houses before we became established. Then an opportunity came for me and I decided enough was enough. At that time, we owned three houses in London – we still own those three houses and I just decided to come to Uganda to visit and I stayed.”

Sudhir bought four Mercedes home to Kampala to sell in an attempt to stimulate a new business. It didn’t work out and he was back in Uganda sleeping on hard floors. The troubles of his country haunted this return.

“When I came in 1985 June; July the first coup took place at 12.30 in the afternoon soldiers started coming into our country the whole capital everything closed overnight. Within hours looting started; I have never seen anything like that in my life,” he says.

“It was a moment when a town looks like it has been hit by a bomb. People stealing 100 litres, half the things are on the street. Soldiers from the other regime were dead; a few of them were lying in the street. It was really a moment where you don’t think of all those things, but you have to make sure you survive and you don’t get in the way of wrong stray bullets.”

“It took me a year before I could start my own business because I wanted to see what was going on. After nine months I met a gentleman called Mr Gandesha; he was big property owner he liked me and said: ‘I have a shop for you come and see me tomorrow.’ The next day we agreed the rent he gave me the keys and I started my first business. I opened my first shop. The first business we started was selling salt and after a few times I moved into selling beers. It turned out to be really good for me,” the Ruparelia Group Chairman recalls.

“Within time we got to know a few people who were actually importing directly. One of them approached me and said look I have a truckload why don’t you buy my beer? I said I don’t have all the money that you are asking me, but I can pay you half now and half at four o clock after two days. He said, OK, I am trusting you and he sold me the whole truck – about 250 cases of beer – I paid him his fifty per cent and when he came after two days the money was ready. For him he was very happy that he got his money in time and turn around his business instead of four times a month he was doing about seven times. So, he started selling me beer then his friends started coming to me and I would do the same thing. So, I created a very good reputation- if you give your word you keep it. Within six months I was the number one beer trader in the country!”

Sudhir says that many of the people who bought beer from him were foreigners and paid in foreign currency. With time, he started doing some informal foreign exchange business on the side, which brought in a lot of money. In 1989, beer industries in Uganda were reopened and importation of beer was banned.

“To ensure my survival, I concentrated on the forex business, opening Uganda’s first and oldest forex bureau, Crane Forex Bureau, which is still in existence to-date. By 1990, we were raking in over $10,000 profit a day. So, I started buying property. My house in Kololo (which I recently razed to build a new one) was the first private property. It cost $800,000, but I started out with a down payment of $300,000 and paid the rest in installments over a year. The building that houses Tourist Hotel (also his) on Market Street was my the first commercial property I bought in 1992.

“Meanwhile, the forex business soon grew so big the banks were coming down hard on us because we were eating into their profit. So, we decided to venture into banking by developing the forex into a bank so that our future was secure. Crane Bank (now defunct) was opened in 1995, which was a milestone for us.”

It’s from the bank that we diversified into other sectors like insurance, media, education, floriculture, hotels and so much many more.

It took decades to build the property, trading and financial empire in Uganda to a point where in one year alone he collected $600 million in rent. Along the way, Sudhir had to make a lot of tough decisions including saying no to Libya’s former all powerful leader Muammar Gaddafi – surely one of the few to take this risk.

Gaddafi wanted to buy the jewel in Sudhir’s crown: the five-star 780-room Speke Hotel on the shores of Lake Victoria for $120 million. Sudhir – who is famous for knowing exactly what his assets are worth – wanted at least $165 million. He turned down several entreaties from the Gaddafi camp.

Proof that you can’t always be popular – especially when you have a billion-dollar fortune.

“Not everyone is your well-wisher, or a beneficiary of the business you create. There are always going to be some unsuccessful people who want to see the downfall of others it is their nature and there is sometimes the issue of why should this guy be the one to be successful? Us as a group, we don’t supply anything to government our dealing with the government is very minimal. The only way we do business with them is either they use our hotels for their conference facilities or they rent our offices for office accommodation. So, we are no way dependent entirely on government although the government is the biggest employer and biggest user of services. …We are the biggest taxpayers in the country and we continue doing business, but totally in the private environment,” he says.

Shrewd decisions like the Gaddafi refusal has only helped expand the family empire. In the worst of times for the world economy, Sudhir sees a brighter future in Uganda.

“Africa is still the last frontier. We have all the resources that we need which are at the raw form so the opportunity of adding value and benefitting. Uganda is very fortunate we have oil in the country and the government has finalised agreements with multi-nationals like Total and Synoil so we hope that activities in the oil industry will pick up and 2022 is a time to be here.”

Sudhir is indeed a risk taker and hustler in the best and worst of times. More so he will be remembered as an entrepreneur who took adversity head on; gambled and won.