Mr Kintu who was charged with abuse of office was assigned to deliver cash meant to facilitate NRM agents and supervisors in Busoga. Many agents went without facilitation, or got half payments

by Lawrence Kazooba
in News, Politics
0 0
0

One of President Yoweri Museveni’s aides who was arrested on charges related to stealing elections money meant to facilitate vote protection in the just concluded general elections, has negotiated for amnesty, Watchdog has learnt.

Mr George Kintu who was arrested for swindling more than sh100 million meant for vote protection in Busoga alongside Ms Norah Bamutaze who is still on the run, has requested to return all the missing money in a pre-bargain deal that would save him from going to jail.

Mr Kintu was detained at Nalufenya police station in Jinja after he turned himself in after learning police was hunting for him. He was given bond on February 11, 2021 after upon admitting to offence and assured his employer the Office of the National Chairman that he would return the money but wanted to be forgiven.

Mr Kintu whose case file number is GEF/05/021 was given bond to allow him mobilise the funds and Mr Hondiko Patrick stood surety for him. He is required to appear at police again on February 17 to renew his bond.

Mr Kintu who was charged with abuse of office was assigned to deliver cash meant to facilitate NRM agents and supervisors in Busoga. Many agents went without facilitation, or got half payments. 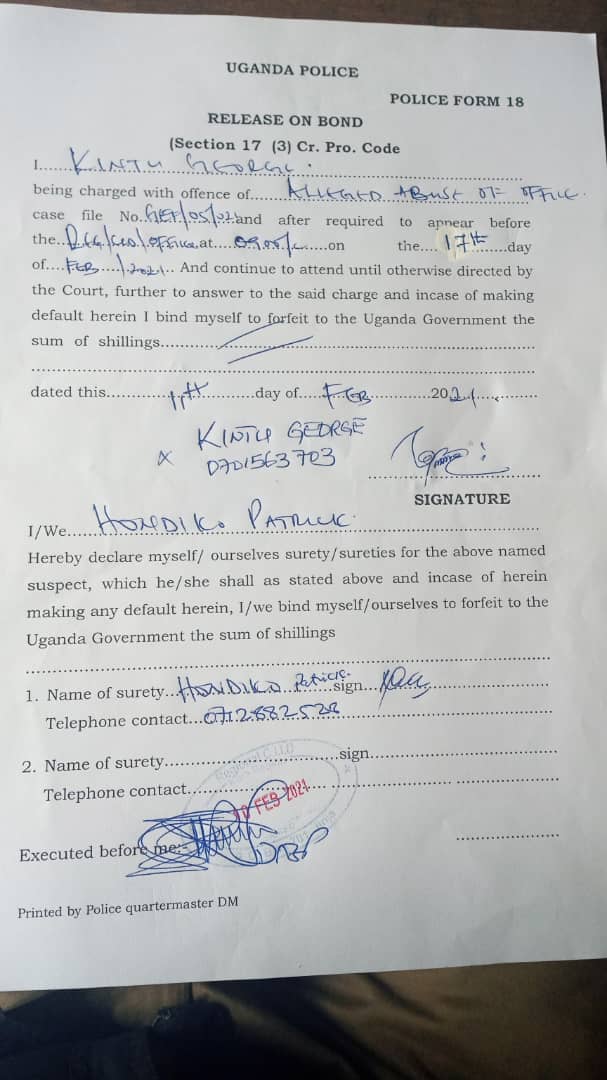 The matter was raised by Karamoja minister Moses Kizige during a cabinet meeting, forcing ONC to seek for arrest of its two officers who were charged with payments in Busoga.

Kintu’s accomplice, Ms Norah Bamutaze, is still on the run and police is hunting for her. However, this website understands Norah too wants to negotiate before she is taken in.

Ms Bamutaze signed the money for vote protection for Busoga region, however, she allegedly delivered half the cash before she disappeared. She has not reported to work since.

Watchdog spoke to Ms Bamutaze via telephone and denied any wrong doing, instead pinning Mr Kintu.

Speaking to ONC administrator, Mr Faruk Kirunda, admitted that some of the officers in his office did not follow guidelines and that is why arrests are ongoing. He said ONC is only interested in recovering the money from its officers.

“Our aim is not arrests, but we want the party money to be delivered to the people who did the work.” Kirunda said adding, “We still have some seven people who have not been paid.”

Kirunda said if the officers return the money, no charges will be preferred against them. He also apologized for not deploying many people to protect Museveni’s votes because of Electoral Commission and Ministry of Health Covid-19 guidelines which barred many people convening at polling stations. He said, atleast one person was deployed at each polling station across the country.

Mr Kirunda said vote protection work went on well, despite a few glitches which are being fixed. He however said that NRM was able to deploy poll agents at all polling stations and that is why he has secured all original DR forms.

HAROLD KAIJA: Why Ugandans must say no to taxing Bank withdrawals

SAM EVIDENCE ORIKUNDA: The European Union is annoyed because their plans in Uganda flopped

SAM EVIDENCE ORIKUNDA: The European Union is annoyed because their plans in Uganda flopped