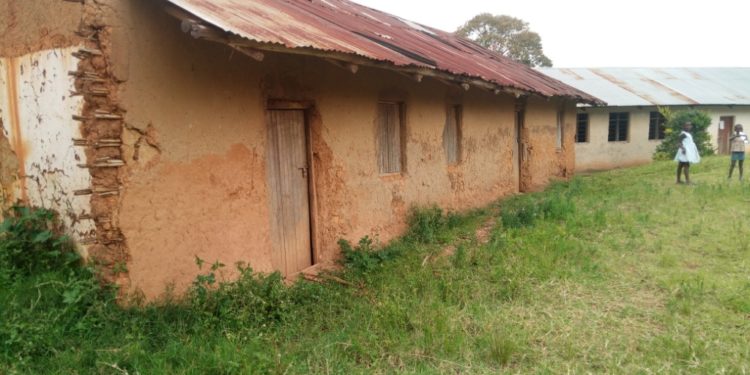 The angry parents said that since the school existence, government has never constructed even a single class room block yet the neighbor schools have benefited a lot from the state.

The government aided school was founded by Church of Uganda in 1976 to provide education services to the community, but since then, the school has never benefited from the government apart from a toilet.

The school apparently has an enrollment of 850 pupils and it operates in 7 dilapidated semi- permanent classroom blocks that were put up by the parents with the help of foundation body that is the church in 1976 and they are all full of cracks and leaking.

Innocent Twinomastsiko, Jolly Nuwagaba, Allan Kyomukama and Bernard Kashobera all parents at Bishops Kasheeshe primary school said that apart from a toilet, the government has totally done nothing towards the development of their school saying that what is disappointing is how government has developed the neighbor schools yet they also pay taxes.

Living Mwebabazi, a ray reader at Bishops Kasheeshe C.O.U and a member at school management committee said that the foundation body and the school parents have played their role saying that the remaining role should be done by the government asking himself why has the government helped their neighbor schools leaving theirs as if it doesn’t educate the children of Uganda.

Mwebabazi now asks government to at least come in and support the education of young Ugandans.

Annet Musasizi, the school head teacher said that since the school’s existence, the government has failed to put up even single a structure saying that the available structures were built by the parents with the help of the foundation body and they are falling anytime.

Musasizi says that whenever it rains they are forced to send pupils to their homes in fear of their lives and the teachers do shelter in the church due to class room leaking a thing she says to have affected the school’s performance.

When contacted for a comment, the Rubabo county Member of Parliament Hon. Mary Paula Turyahikayo said that plans for developing the school are underway and that she has already submitted the name of this school in the ministry of education and sports for consideration.

Jackson Turyahumura ,the Rukungiri District Education Officer called for calmness among parents and the foundation body saying that as the district education department they are aware about their problems and that very soon the school will be supported since they have already has a budget.

State House to US Ambassador: Don’t poke your nose in Ugandan affairs just as we don’t advise your Trump to pull up his socks