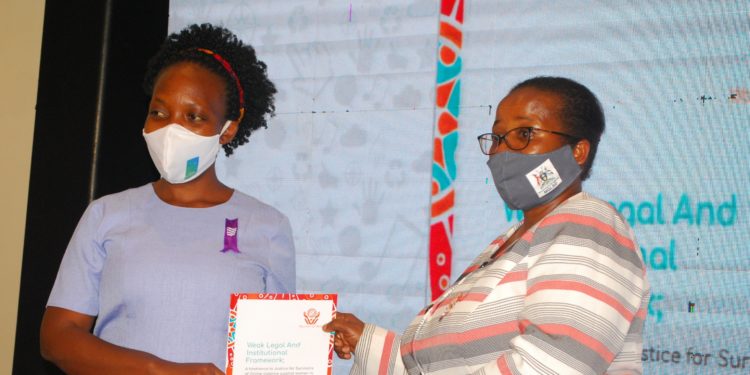 A report conducted by Unwanted Witness has indicated that over 72 per cent of female users of internet in Uganda face cases of cyberbullying and harassments.

The report also indicates that the escalating cases of online violence against women in Uganda are as a result of weak Legal and Institutional Frameworks that have left perpetrators free.

Christine Nabutiti Wasamoyo, an Advocacy and Policy Lead at Unwanted Witness while presenting the research findings on Tuesday at Hilton Garden Inn in Kampala said most women who are harassed on the internet don’t know where to report given the fact that not all police officers are well versed with the legal frameworks on technology-related violence against women and girls.

“Most of the women we interviewed didn’t know anywhere to report and their only remedy was to block such accounts that were bullying them. Cyber harassments against women have made women lose confidence in themselves especially when their private life is exposed to the public domain. Culprits mostly use the Social media platform,”said Ms Nabutiti, adding that some victims of cyber harassment have lost their marriages, jobs and families.

The report also shows that Technology-related violence is just as damaging to women and girls as physical violence and it is estimated that 73 per cent of women have endured cyber violence, with women being 27 times more likely than men to be harassed online.

Although the number of women being harassed on the internet is high, according to the report, the existing laws in several instances, are essentially no longer being enforced. The excessive time taken to file charges, delays in investigations, and the number of years that go by before a case is properly considered are some of the factors that make women survivors of technology-related violence desist from filing complaints.

According to Ms Nabutiti, non-consensual sharing of photos, videos and messages with pornographic content to cause shame to the victims is the most common online vice that perpetrators use to torture victims followed by online hate speeches, Cyber harassment, online defamation, online sexual exploitation and cyberstalking with 1 per cent.

The report also indicates that 30 per cent of culprits use fake accounts to harass victims, 19 per cent is Gender trolling, 19 per cent are a result of hacking, 6 per cent communication threats, 6 per cent direct chat, 6 per cent got numbers through victims’ stepmothers and dairy.

Online harassment has no jurisdiction and fears nobody, over 95 per cent of lawmakers in Uganda’s Parliament have experienced cyberbullying. And according to legislators several things perpetuate or amplify violence against women using technology

These are: Existing imbalances in marriage relations, perceived as effects of marital failures, are seen to raise moments of conflict which are not easily resolved. Weak laws, Ignorance of the masses, Moral decadence, means of extortion, Acts of revenge, A means to cause fear and intimidation, Random incitement of violence.

Unfortunately, according to lawmakers the documentation of how laws have been used to curb online violence against women has not been done, and so, there is lack of precedence to alert victims or cause the offenders to fear.

Dorothy Mukasa the Chief Executive Officer of Unwanted Witness said that Online threats of violence seem to have a very simple purpose but they are intended to act as a reminder to women that men are dominant, that women can be attacked and overpowered if men choose to attack, and that women are to be silent and obedient.

“Many threats contain ultimatums: if a woman doesn’t stop engaging in activities that the men issuing threats find undesirable, she will be punished with physical violence or even death. The intent of threats is to establish offline patterns of violence against. One of the most common experiences in Uganda a woman has when discussing online abuse is either receiving advice about how to handle it or being condemned for handling it “incorrectly.” This advice is sometimes well intentioned but often delivered in the form of a mansplaining response to a woman who is pointing out that cyber sexist abuse has been directed her way,” Ms Mukasa said.

In 2019,  Aminah Muwonge a mother of five almost lost her marriage due to a stranger who picked her contact from her workplace, what started as a friendly conversation turned hostile when the stranger started sending her love messages and pornographic materials.

“This person just started calling me even at night, I asked him why he was calling me at such time, and this turned into a conflict with my husband since he kept asking me who was calling at night,” she said.

According to United Nations online violence is a human right violation, domestically government has enacted laws like the Computer misuse act of 2010 to make provision of safety and security of electronic transactions and to prevent unlawfully access or misuse of information system. In 2014 the Ant-pornography law was passed to establish the pornography control committee however the impact of such laws has not yet been felt by the majority of the public thus giving room to online cyber bullying.