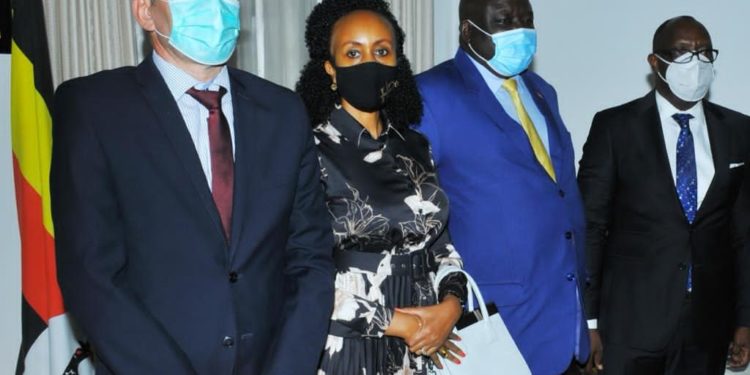 The Czech Republic has officially opened a consulate in Uganda, a step to promote trade, investment, political, social and cultural relations.

The consul to Kampala is Mr. Stephen Mpuuga Kaboyo. He presented his credentials to the state minister for international affairs Hon. Henry Oryem Okello on Friday December 4th 2020, during a colorful ceremony held at the Ministry of Foreign Affairs In Kampala.

The ceremony was also attended by Czech Republic’s Head of Mission in Nairobi, Ambassador Martin Klepetko.

‘’We would like to develop our business, diplomatic ties and many other areas of cooperation. We are indeed ready to jump in whenever there are opportunities. We will bring in our companies and experts to develop the cooperation between the two countries.’’ Said Ambassador Klepetko.

Speaking about his appointment Mr. Kaboyo said that his primary responsibility is to promote trade and investment between Czechia and Uganda.

“There is a lot that Uganda and Czech can do. The Czech Republic is a highly industrialised economy and very diversified. It is a member of the European Union. My focus will be in agribusiness, health, and education. For instance they have the best universities in Europe.” Kaboyo said.

The Czech economy is a developed export oriented market based on manufacturing, innovation and services. It is a highly industrialized country with the industry sector accounting for 38% of the economy.

The GDP of Czech is above 250 billion USD. It is the fastest growing economy in Europe averaging 4.4% for the last couple of years.

‘‘Clearly there are synergies that we can build between Uganda and Czech. A good example is our commodities. The Czech imports significant quantities of raw materials. This is a ready market for our exports. We do not have to look very far. The potential is there.’’ Kaboyo said.

He observed ‘‘Trade between Uganda and Europe still remains low. Finding markets for our exports will be one of my priorities. I will also be working hard to attract inward investment.’’

He explained that Czech Republic is open for business.

He observed: ‘‘I have had a chance to interact with the Czech private sector. They are keen to open and create closer dialogue with the Uganda’s business community at all levels. I will do this through creation of true economic and business partnerships.’’

He is the Chairman of the Total Uganda Advisory Board, Chairman Sino Uganda Special Economic Zone. And is the Resident Advisor Loon/ Alphabet, a Google company.

He is also the chairman of the Nile Competitiveness Initiative – an Advisory Group set up by President Museveni. The Think Tank advises the President about how to accelerate investment, production and productivity in the ministries of trade and export, agriculture, the financial sector and public service.

He served as an intermittent expert for IMF, participating in international missions providing technical assistance in developing financial systems.