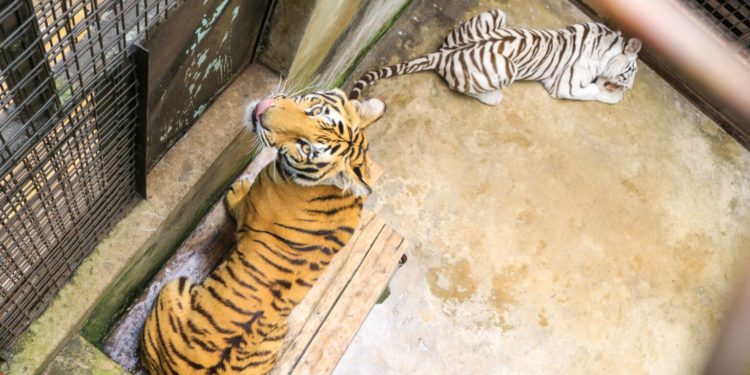 If you have watched tigers on television or movies, you’ll agree that they are some of the fiercest cats in the world. However, coming in close proximity with the beast is another experience all together.

“Uganda Wildlife Conservation Education Centre (UWEC) is delighted to welcome the largest member of the cat family, the tiger, back to Uganda,” announced the centre’s executive director, Dr James Musinguzi. The animals used to be at UWEC in the 1970s then called Entebbe Zoo, but naturally died when they came of age.

Dr Musinguzi said the tiger is an exceptional icon of wildness, beauty, and strength.

“Seeing, hearing, and smelling a tiger up close for the first time can be an unforgettable experience which, for Ugandans, is only possible at this wildlife centre.” He flowerily said of the cats whose life expectancy is averagely 15 years.

East Africa did not have any tigers until the UWEC unveiled them. Next Thursday, the minister of tourism is expected to officially open the tiger exhibit in Entebbe for the public.

The tigers, a male and female, arrived in the country in March, just before lockdown over Covid19 pandemic, a period which has affected the revenues to UWEC, yet it has a huge budget to feed and look after the wildlife in the sanctuary.

The tigers have completed their mandatory quarantine period of three months and are ready to enter the exhibit where the public can view them at close range.

The pair completes a full picture of big cats; with leopards and cheaters already at the wildlife centre.

The tigers add to the product range UWEC offers because they are not indigenous to Africa. This particular pair was from South Africa, where they were bled in the zoo. The pair was donated to UWEC by the World Association of Zoos and Aquaria (WAZA) body. If they were to be bought, they have cost the centre at least, USD20,000, according to Dr James Musinguzi, the executive director of UWEC. However, the tigers will only be managed in UWEC, and not be introduced to the jungle.

Musinguzi explained that the tigers have adjusted well to Uganda, adding that the cats have strong survival prowess not only in rain forests but also deserts, mangrove and winter areas.

Dr Musinguzi told the media at the unveiling press conference, that UWEC’s biggest role is Conservation Education and the arrival of tigers was going to teach Ugandans and visitors about tigers, which are listed as some of the endangered species.

“The pair’s debut is a dawn of hope which fulfills our conventional roles of education, conservation, research and recreation,” Musinguzi said of tigers, adding that they are going to play a role of ambassadors for tigers in the wild, largely, in Asia where they are indigenous.

Tigers are extremely territorial species, so the pair will get a chance to explore the tiger habitat, which has been specially constructed to suit their behavior. In the wild, Bengal tiger habitats are tropical rainforests, marshes, and tall grasses. Tigers rest in the shade during the day and hunt at dusk or dawn. The Bengal tigers have been spotted in the shade or around bodies of water to cool off.

The arrival of tigers is also expected to boost the falling revenues of the centre since Covid19 pandemic hit, affecting their key clientele of school going children and tourists from Europe and America.

Over the last century, subspecies of tigers dwindled from eight to five due to hunting as trophies and habitat loss from intensive logging and development. The remaining subspecies including the one we have here need protection and are classified as endangered according to the International Union for Conservation of Nature’s (IUCN) Red list of Threatened Species.

The True Economic Impact of the World’s Lockdowns

The True Economic Impact of the World’s Lockdowns