MANIFESTO DIGEST: Why NRM has failed to fix leakages in agriculture?

The burden of building a critical mass of empowered farmers rests on the shoulders of National Agricultural Advisory Services (Naads), who make the intersection between government policy, research, markets and farmers. 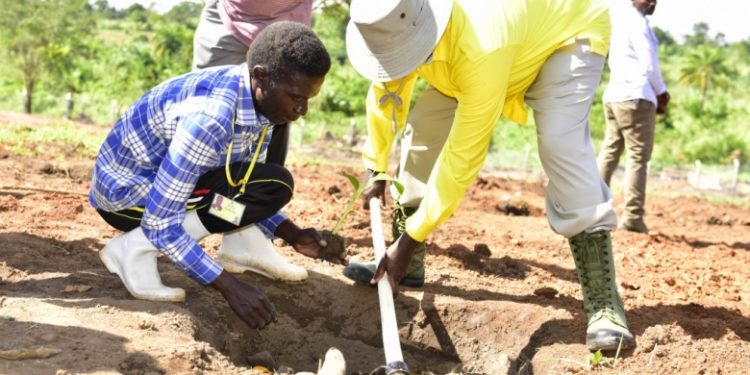 President Museveni at one of his model farms

Every election cycle, the ruling party- National Resistance Movement keeps highlighting agriculture as a priority area in its strategy of fishing millions of Ugandans out of poverty.

The big question is: Why has NRM failed to achieve the objective of modernizing agriculture or, increase production and incomes of farmers?

The burden of building a critical mass of empowered farmers rests on the shoulders of National Agricultural Advisory Services (Naads), who make the intersection between government policy, research, markets and farmers.

Naads, offering extension advisory services, should build an end-to-end agriculture industry which has consistent supply for raw materials of good quality as well as support industrialists in value addition and small-scale food processing.

The lack of an organized system to ensure there is no breakdown in the supply chain, needs answers and no agency is better placed to make the call than Naads.

Some people have argued that the NRM government is contributing to this problem because it lacks commitment to develop agriculture demonstrated in its paying lip service to agriculture, owing to the fact it looks away when corruption or incompetency is highlighted.

The critics also point to the Maputo declaration recommendation which asked African governments to commit 10% of their budgets to agriculture which employs majority of its people.

Mr Museveni has instead prioritized education, defense, roads, health ahead of agriculture, in budgeting. Needless to say, this is due to competing priority areas in developing countries such as Uganda, whereby one cannot spend more on agriculture and leave out other equally critical services such as education and health which are immediate and hard pressing.

Uganda has however put up interventions to support the sector including investments in infrastructures such as roads, energy, research, opening regional markets, among other things. These infrastructures support other sectors to grow too.

Despite all the above, agriculture which employs 70% of Ugandans, has continued to suffer internal structural challenges, and most of it boils down to the human resource capital in the agricultural sector.

The government put in place pillars to support farmers including research institutions, extension services and opened markets however, a successful and prosperous agricultural sector has eluded Uganda because Naads has not executed to the letter its job of harnessing the output of farmers.

Whereas scientists in the National Agricultural Research Organisation (NARO) have released breakthrough works in areas of coffee, cassava, bananas, potatoes, etc, Naads however has nothing to show in actual production the billions that have been sunk into it.

We are back to square one when National Agricultural Advisory Services (Naads) was rolled out, billions of shillings poured in, only for the agency to become a hub for corruption, fraud and mass incompetence. That is why in 2011, President Yoweri Museveni surprised everyone when he campaigned against NAADS and shaming its officials on his campaign trail. At the time, over Ugx600 billion was being spent by Naads per year, but its output was literally inconsequential.

The failure of Naads gave birth to Operation Wealth Creation, a hands-on agency led by the military, which was introduced to help fix the missing link between farmers and boardroom technocrats in Naads and Ministry of Agriculture.

The soldiers, majority of whom are veterans brought passion to the assignment, walking every sub country and village in Uganda, to engage farmers to graduate from subsistence to commercial farmers.

Soldiers made a difference, ensured farmers received inputs on time. Their interventions have seen coffee harvests increase. However, OWC is not where it should be if it were not for the inefficiencies in Naads which keep slowing down their pace.

When OWC hit the road to work with farmers, Naads concentrated on offering technical work including procurement of farm implements as well as ensuring input standards.

As OWC relieved Naads of logistical challenges of farmers, procurement of farm implements and relations with suppliers is still upside down.

OWC over the years is slowing down its speed as its coordinator report poor or no facilitation, lack of payments to suppliers as well as over inflating procurement for its functional equipment. Naads pays for OWC movements. The failures of Naads, risk crippling NRM’s plans for agriculture.

In the 2021-26 Manifesto, NRM government has once again promised to focus on 14 lines of production to develop the agriculture sector, making Uganda food and nutrition secure.

The NRM also promises that it is going to support value addition for these 14 lines of production.

The numbers however don’t add up. The output of farmers is too still poor compared to the potential of the agricultural industry.

When you look at animals; Uganda rears only 14 million heads of cattle, 14 million goats, 50 million chicken, one million sheep, 447,000 tonnes of fish, which paints a picture of very poor output on all scales.

Imagine, there is ONLY one cattle for every three Ugandans (1:3)! This is not the potential of Uganda. No wonder, poverty levels especially in the youth populations keeps growing, and the dreams of finding work in factories and industry cannot be achieved because factories close due to among others, lack of raw materials.

Even if the NRM government says it is going to ensure value addition to maize to produce flour, animal feeds, starch for pharmaceuticals on which USD 20 million is spent per year. Or tell voters that they are going to add value to matooke, cassava, beans, Irish potatoes, millet, sugarcane, animal products, coffee, tea among others, many analysts will tell you this is hot air, because they government is not willing to address actual things affecting agriculture, namely, a failed, incompetent, bureaucratic workforce at organizational level of the ministry of agriculture, particularly the Naads secretariat.