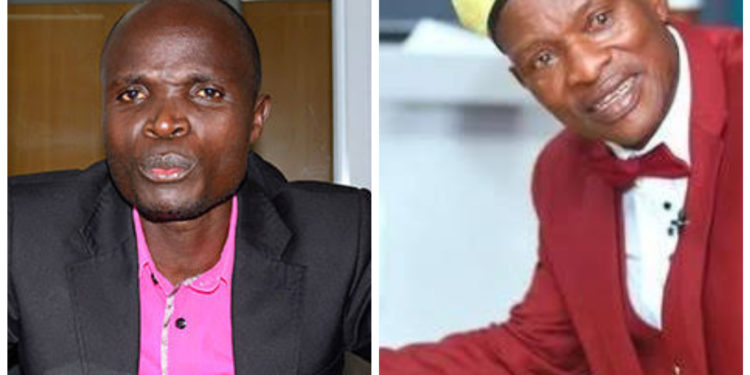 Controversial political analyst Joseph Tamale Mirundi has claimed that Ronald Mayinja is about die citing it as the reason why the singer is contradicting himself of late.

Appearing on Radio Pearl on Saturday, Mirundi said when Mayinja went back to school (Makerere University) he just became stupid instead of becoming intelligent.

He added that the former Golden Band member lost it when he started jumping from one political party to another.

“Mayinja is a confused fellow, he is moving from one party to another aimlessly. Now he is singing for President Museveni, is he his campaigning manager? Who asked him to sing for him? I think he is about to die. You know if your about to die you start contradicting yourself. The man who used to condemn the bad leadership in the country is now praising it,” the former Senior presidential press secretary said.

“… That’s why I told my family members that when I start undoing the good things I did in the past, they should chain me because that will mean that I’m about to die.”

Addressing the media earlier today in Kampala, Mayinja said he was tired of the endless insults from National Unity Platform(NUP) supporters who of late labeled him greedy and money minded hypocrite following his new song praising President Yoweri Museveni.

A few months ago, the “tuli kubunkenke” singer rejoined NUP/People Power from NRM. While addressing the Kamwokya based political outfit supporters, Mayinja said he had gone to NRM to spy on President Museveni. He went ahead to ask for forgiveness from NUP supporters who were hurt by his earlier defection.

“Today I have decided to officially join NRM. I’m tired of getting insults from one party for nothing. When you disagree with them they abuse you. I don’t think that’s the right thing to do,” Mayinja said on Saturday.

Mayinja further disclosed that he is going to work around the clock to convince  other NUP members to join NRM.

” I’m going to come up with so many projects which shall help me dialogue with other opposition members especially those I have left in NUP to join this side.

“I will not be taking them to President Museveni to get money.. but I will just convince them to join the party for their own good because NRM is peaceful compared to other political parties.”