“People who don’t have jobs spend most of their time giving birth as opposed to those who are involved in income generating activities. We need to get our people work so that they can take care of their offspring, whether they have two or six children shouldn’t be the issue,” he said.

Referring to his book Uganda:7-Key Transformation Idea, he added that fighting ignorance, poverty, and disease is a key aspect of Buganda’s major aspirations through which he administration is working towards the restoration of the Kingdom’s glory. 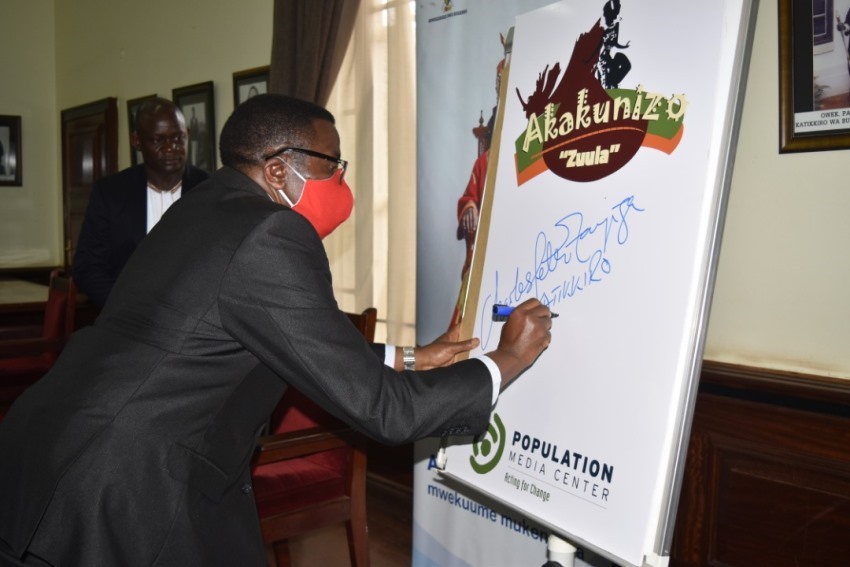 Owek. Mayiga made the remarks at Bulange Mengo while receiving a delegation from Population Media Centre Uganda who had visited the Kingdom headquarters to brief him about their activities that are focused on making an impact on the lives of the people of Buganda and Uganda through entertainment and education. The delegation which included actors and actresses was led by Patrick Lubowa Bwanika, Population Media Centre’s Resident Representative.

“Through our flagship radio drama, Akakunizo, we use the power of entertainment-education to address issues of gender based violence, nutrition, young people’s sexual reproductive health as well as family planning in areas of Buganda and beyond,” Lubowa told the Katikkiro.

However, Lubowa said, Population Media Centre, with global headquarters in the United States and operating in 50 countries globally reaching more than 500 million people, is looking for ways through which to work with the Kingdom of Buganda.

“We are very proud of the work of Ssaabasajja Kabaka in in the fight against HIV/AIDS in Buganda, Uganda and Africa as well as his steadfastness over the last 27 years in uplifting his people out of poverty,” Lubowa said.

“The Kingdom of Buganda and Population Media Centre have the same aspirations of making the people of Buganda and Uganda better. We are very proud of the work that you have done in Emmwanyi Terimba as well as being a source of inspiration for our people. It is only natural that we combine our efforts to achieve our mutual targets,” Lubowa told the Katikkiro.

The staff of Population Media Centre pledged to participate in the forthcoming Kabaka’s Birthday Run by buying vests worth Shs1m and contributed to the Kingdom’s treasury by buying a certificate.

The Katikkiro said the Kingdom was open to work with partners such as Population Media Centre to fight poverty, ignorance and disease in the Kingdom.
Population Media Center (PMC), an internationally focused, US-based nonprofit, non-governmental organization was founded in 1998, and reaches more than 500 million people with operations in 50 countries with accurate, trusted information on issues that affect people.
In Uganda, PMC is currently producing two 156-episode radio serial dramas, one in Luganda language (Akakunizo) and the other in English (Sotakai). Both dramas were designed using PMC’s unique, evidence-based methodology for social and behavior change. The dramas are part of the DFID-funded RISE (Reducing High Fertility Rates and Improving Sexual Reproductive Health Outcomes in Uganda) project. Population Media Centre carries out activities in a partnership with Marie Stopes International, Makerere University School of Public Health, Reach a Hand Uganda, and Family Health International (FHI360).