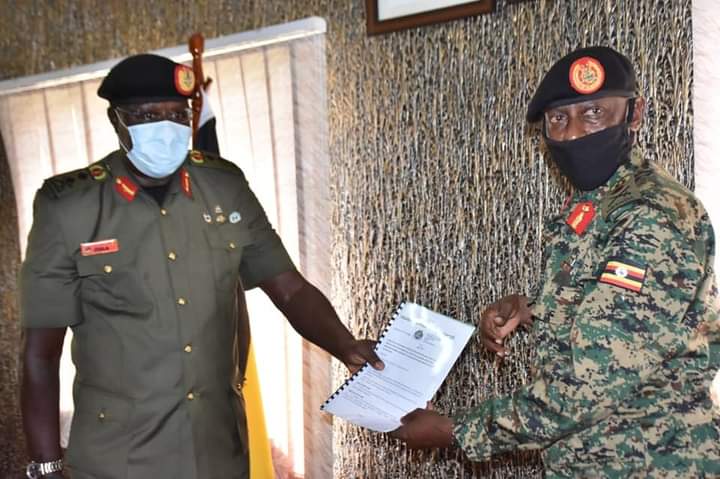 The ceremony was presided over by the UPDF Joint Chief of Staff (JCOS) Lt Gen Joseph Musanyufu and was held at the Ministry of Defence and Veteran Affairs (MODVA) Headquarters-Mbuya.

While presiding over the function, Lt Gen Musanyufu called upon the new chief to continue cultivating, nurturing and developing the force’s cordial relationship with the population.

“Because of our good relationship with the population, we are who we are. Without it our own existence cannot be guaranteed as a force. All effort should be put in ensuring that nothing jeopardizes that relationship, it’s the bedrock and guarantor of the forces’ existence” Lt Gen Musanyufu emphasized.

Musanyufu congratulated the outgoing Chief CIMIC for working exceptionally well and also welcomed the new Chief. He stated that the office of Civil Military Cooperation has grown over time due to the expansion of UPDF and its nature of work. He advised that the Incoming chief should ensure that all work related with the relationship of the army and the population is housed, coordinated, managed and supervised by the CIMIC office.

Gen Musanyufu added that the coming in of the new chief will give a sigh of relief to the Chief Political Commissar (CPC) and enable him to concentrate on Ideological work with in the forces. He however, called upon the CPC to always synergize CIMIC with political work.

The Joint Chief of Staff also told the new Chief to put to good use the good will from the development partners who are always ready to support the office especially in skills acquisition.

The handover ceremony follows a recent appointment by the President of Brig Gen Innocent Oula as Deputy Managing Director of National Enterprise Corporation (NEC) and Brig Gen Emmanuel Rwashande as Chief CIMIC. The JCOS congratulated the two General Officers upon their appointments.

Maj Gen Oula was hailed for his selfless service to the Force and the nation at large while Brig Gen Rwashande was called upon to emulate the work ethics of his predecessor to ensure continuous success of the Chieftaincy. Musanyufu termed CIMIC as a critical force multiplier in the maintenance of Uganda’s security and a source of the army’s strength and a reason for UPDF existence.

Maj Gen Innocent Oula in his handover remarks thanked the President and Commander-In-Chief for entrusting him to serve as Chief CIMIC. He hailed the UPDF Leadership that provided him with the necessary support to execute the mission of CIMIC. The outgoing Chief tipped the incoming General Officer that through proper accountability and prioritization of scarce resources, much can be achieved.

Brig Gen Rwashande thanked the UPDF Leadership for entrusting him with the new responsibility and pledged to perform to the best of his ability in fostering the good strategic relationship between the UPDF and the population that has seen the Force grow from the 1981 small army to the current multi-service Force.

“The historical background of NRA, now UPDF, is that it was not founded on superiority of military power but on strong Civil- Military Relations with clear headed ideology by the Commander-In-Chief of the UPDF. It is my responsibility to emulate the same,” said Brig Gen Rwashande.