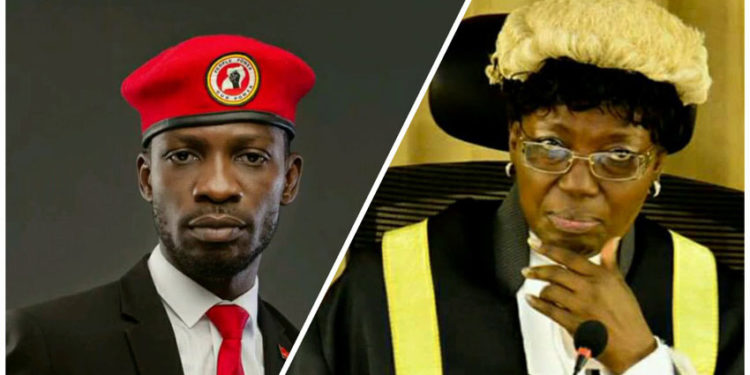 Kamuli Woman Member of Parliament Rebecca Kadaaga could take quite longer to have any sigh of political relief after Kyadondo East Legislator Robert Kyagulanyi Ssentamu joined the long list of people who are after her political career.

Kadaga is currently fighting for her political position with her fiercest rival and State Minister for Lands Persis Namuganza who is determined to eject her out of the ruling National Resistance Movement party [NRM] Central Executive Committee [CEC].

It’s however not only Namuganza that is after the Busoga’s most respected politician’s political life.

To add to the already known Kadaga’s troubles, People Power leader Bobi Wine has emerged as a surprise force that wants Kadaga out of Uganda’s politics at all costs.

Recently, a list reportedly identified by the big politician herself made rounds in major news tabloids with names of political foes who are after her political life.

This News website has reliably learnt that the determined youthful Presidential hopeful had barely a month ago tasked his political handlers to identify a candidate that would hold NUP’s flag to finally give the Speaker a bloody nose in next year general elections.

Although Bobi Wine’s blue eyed boy Moses Bigiirwa denies there being any bad blood between his master and Kadaga, he confirms there has been such instructions from Bobi Wine to establish a formidable force that will see Africa’s first speaker of Parliament politically discarded.

” It’s not right to suggest that my President has got anything personal against Mama Kadaga. That’s not true. But all I can confirm is that we as the party leadership in the district received instructions to identify a candidate to challenge for the seat just like in other constituencies,” Bigirwa told our reporter.

Resultantly, a 23 year old girl identified as Nabirye Bridget has been identified for the task ahead.

Bobi Wine, who has also deployed another youngster in Taliyiwula Sharon to oust Minister Isaac Musumba from Buzaaya strongly believes that deploying young tucks to claim political offices is the way to go for his pro youths new party NUP.