Covid-19: 382 Ugandans who were stranded in Saudi Arabia return home 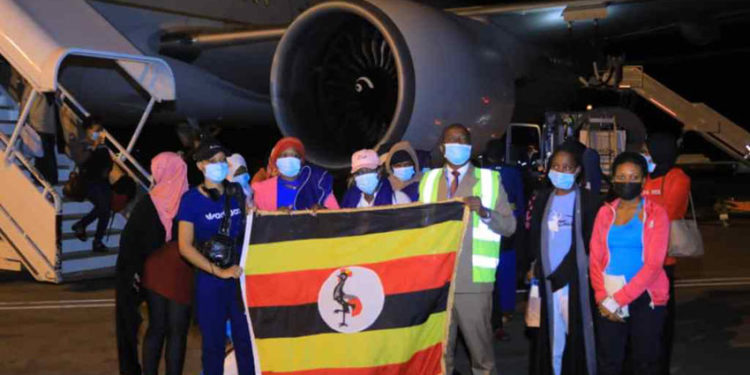 A second batch of Ugandan Nationals stranded in Saudi Arabia, has been successfully repatriated. A total number of 382 Ugandans mostly migrant workers and students were repatriated today aboard a Saudi Arabian Airlines special flight no SV 3459 which departed King Khalid International Airport at 03:45 hrs and expected to arrived at Entebbe International Airport at 8:15pm this evening.

This repatriation was initiated by the Government of the Kingdom of Saudi Arabia, and facilitated by Uganda Embassy in Riyadh and other authorities in Uganda such as the Ministries of Foreign Affairs, Health and Works and Transport.

Given the high numbers of stranded Ugandans in the Kingdom of Saudi Arabia and other countries of accreditation under Uganda Embassy Riyadh, similar arrangements are being worked out to have more Ugandans repatriated.

To date a total of 557 Ugandans stranded in the Kingdom of Saudi Arabia have been repatriated out of 1800 Ugandan who have registered with the Embassy from all its countries of accreditation.

MILLY B BABALANDA: President Museveni’s Credentials Speak For Themselves