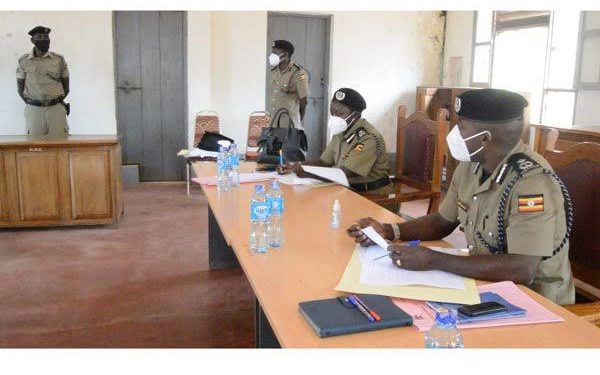 It was all tears as witnesses in Masaka demonstrated to senior Police officers how their juniors have tortured them in the name of implementing presidential orders of curfew.

Today, Thursday marks the second day of a probe by the Police Professional Standards Unit (PSU) that started collecting pieces of evidence from Masaka residents on how police have been inhumanely behaving in that region since lockdown was announced in August 2020.

The probe follows the death of a civilian boda boda cylist by self-immolation at Masaka Central Police Station.

Early July, a motorcyclist identified as Hussein Walugembe, formerly a guard at a construction site allegedly set himself ablaze in the office of Ibrahim Ssesanga, an officer in charge of traffic police in Masaka after failing to convince him (Ssesanga) to return a confiscated motorcycle .

Walugembe’s motorcycle was impounded on June 30, by a traffic officer Julius Ewalu after finding it at a petrol station beyond curfew time.

Following the incident, the Inspector-General of Police Martin Okoth Ochola was forced to dispatch a team of senior officers under PSU to carry out an investigation.

While in the court, one of the witnesses, senior citizen Haji Nuludin Byakatonda from Kyanjale village, in deep tears, expressed to officers how Masaka traffic officer Sgt Ewalu Julius inhumanly manhandled him when he was caught at 7:00 pm and made him sleep in his car. However, the next morning he was asked to pay Shs100,000 to release him.

“Please tell your officers as they are enforcing laws to be human to us as citizens and Ugandans,” a yelling Byakatonda told the PSU chairperson, Assistant Police Commissioner David Manzi.

Yassin Kalyango, also pinned Sgt Ewalu for confiscating his bicycle from his son alluding that it was time for curfew.

Kalyango stated that at the time of getting back his bicycle, Sgt Ewalu asked him to pay Shs100,000.

However, he pleaded until the officer asked him to pay Shs40,000.

The Shs140,000 was presented before the court PSU officer as an exhibit.

Sgt Ssesanga, who survived to death as Walugembewent up in flames was brought in court on crutches with burns and was also accused of soliciting money from local people which caused the death of an innocent man. The court accused Sgt Ssesanga of corruption and misuse of office.

The two accused officers fate is to be determined by the end of the court later today.