by Catherine Apolot
in News, Politics
13 0 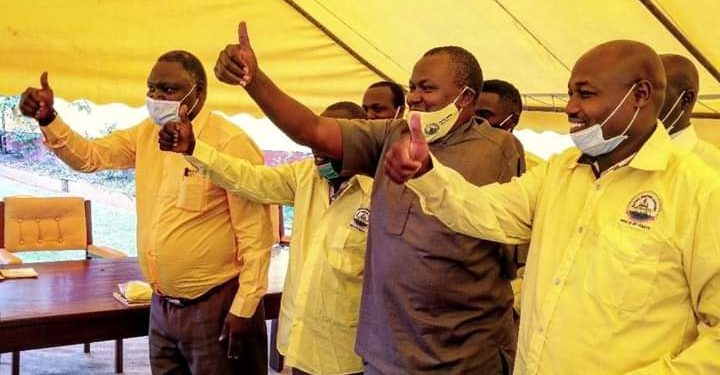 The National Resistance Movement (NRM)’s Deputy National Treasurer Jacqueline Kyatuheire together with the Director of Mobilization Mathias Kasamba on Wednesday received a group of opposition members from Kapchorwa who had earlier defected from the ruling party.

Ms Kyatuheire welcomed the defectors back to the party and encouraged them to unite, build and strengthen district party structures in the Sebei sub-region by attracting more opposition members into the party ranks. She also thanked the leadership of Kapchorwa for the good mobilization in the region.

“NRM is a mass party and has enough room to accommodate every Ugandan,  She said.

The Party’s Director in Charge of Mobilisation Mathias Kasamba, welcomed the group to the party and urged them to be dedicated cadres of the NRM in the sub region. He also called on them to fish out more members to join the ruling party.

The group of defectors was led by Manuel Chebu who said that the current developments ushered in by the NRM government had attracted more people into the party. He furthermore noted that they didn’t come back to the headquarters for favours but to however thank the leadership of the party for the peace and development that has availed in the region since NRM came to power.

Mr Chebu also thanked the government under the leadership of President Yoweri Museveni for handling the Covid-19 pandemic well because as of now no person has died as compared to the neighbouring countries.

George Toskin, the former mayor of Kapchorwa town council who is also the NRM mobilizer for Kapchorwa in his words welcomed the defectors to NRM and highlighted government’s contribution towards the road network in the region, an improvement on the Security situation and handling the issue of cattle rustling. He encouraged the youth to look at the good that the government has done and encourage other people to join the party.