Civil Aviation Authority new board sworn in, these are names of the Board members 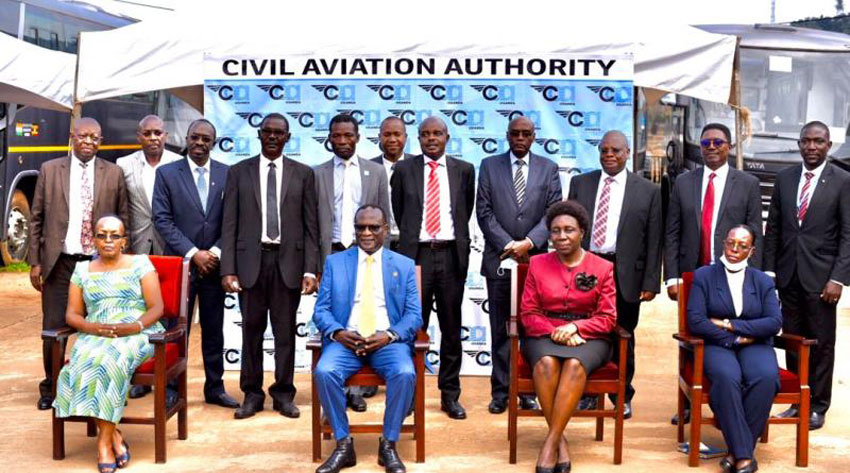 CAA board of directors

The Uganda Civil Aviation Authority (CAA) new board of directors have sworn in with retired former Deputy Chief Justice, Steven Kavuma as its chairperson. He took over from Eng. Edward Mike Ndawula.

The new board was announced on June 3, 2020 following the approval of the appointments by Cabinet.

The inauguration ceremony, which also doubled as a farewell to the out-going members of the Board in recognition of their services to the authority in the last three years was held at the Ministry of Works and Transport’s Central Mechanical Workshop on Friday.

The other new members of the Board are Mr. Lubowa Moses Paul, Ms Ethel Kamba, Dr. Alayo Ocero and Mr. Thomas James Kiggundu. Board Members who served on the last Board and were returned are Hajji Zubair Musoke, Mrs. Angela Kiryabwire Kanyima and and Mr. James Kubeketerya.

The out going Board Chairman , Eng Ndawula highlighted the achievement registered by the old board which included the development of the Authority’s first Five-year Strategic Plan. The Plan was developed through a participatory process with internal and external stakeholders .

“We are pleased that the Authority managed to amend the Principal Legislation culminating into the CAA (Amendment) Act, 2019, and the Specific Operating Regulations to ensure compliance with international standards and requirement, Certify the National Airline, improve the level of effective implementation of International Security and Safety Standards, and upgrade the aeronautical infrastructure,” Eng Ndawula said.

The Board’s term of office is three years.

Uganda: Ministry of Health given another Shs89 billion to deal with Covid-19