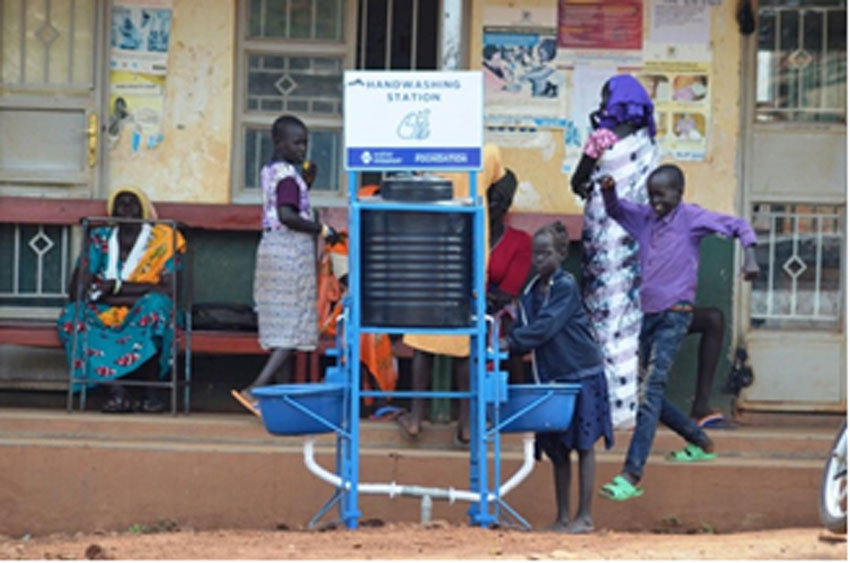 Over 93,000 refugees in the West Nile settlements of Kiryandongo, Rhino Camp, Imvepi have got a reason to smile after receiving hand washing facilities courtesy of Water Mission Uganda.

Water Mission Uganda donated the facilities in order to help the refugees who come from the neighboring South Sudan, the Democratic Republic of Congo and Rwanda fight the spread of the deadly COVID-19 coronavirus.

According to Samuel Apire the Water Mission Uganda team leader in West Nile, “the component of frequent hand washing for at least 20 seconds is being promoted in order to prevent COVID-19 transmission”.

He adds that more than Shs140 million has been spent to fabricate containers which are both foot and hand operated; this to increase the number of hand washing facilities at the settlements which stand at a lowly 65% compared to the high number of refugees.

When we spoke to 18 year old Latong Sarah Mapiong, she succinctly described the process of getting water in a refugee settlement as a fight, “people have very many jerrycans, so it is hard to fetch water “.

Sarah who resides at Kiryandongo refugee settlement explains that in a time when everyone is being advised to regularly wash their hands some families spend the whole day without water.

While at Imvepi refugee settlement in Arua district, Wani Moses who oversees the water point says “when one water point breaks down”, the refugees have to walk for several kilometers to fetch water from outside the settlement which could expose the them to community infections.

Uganda is one of the largest refugee hosting nations in the world with an estimated 1.4 million population, in Kiryandongo district there are over 60,000 refugees and the district water engineering office represented by Joseph Candia admits that there is a gap in the provision of water to refugees as each person in the settlement receives about 15 liters of water per day instead of the recommended of 20.

It is due to these gaps that Water Mission Uganda donated 496 hand washing stations of which 100 are foot operated and 396 are hand operated.

Aywek Pauline Orik their team leader assistant in the area says they also look “to improve the refugees sanitation and hygiene”.

But the Arua district refugee desk officer Solomon Osakan calls for the installation of more facilities and soap distributed to all homesteads.

Other refugee settlements that will be supported by Water Mission Uganda are Omugo in Arua and Bidibidi In Yumbe district with funding from UN Refugee Agency, Poul Due Jensen Grundfos Foundation and the government of Uganda.