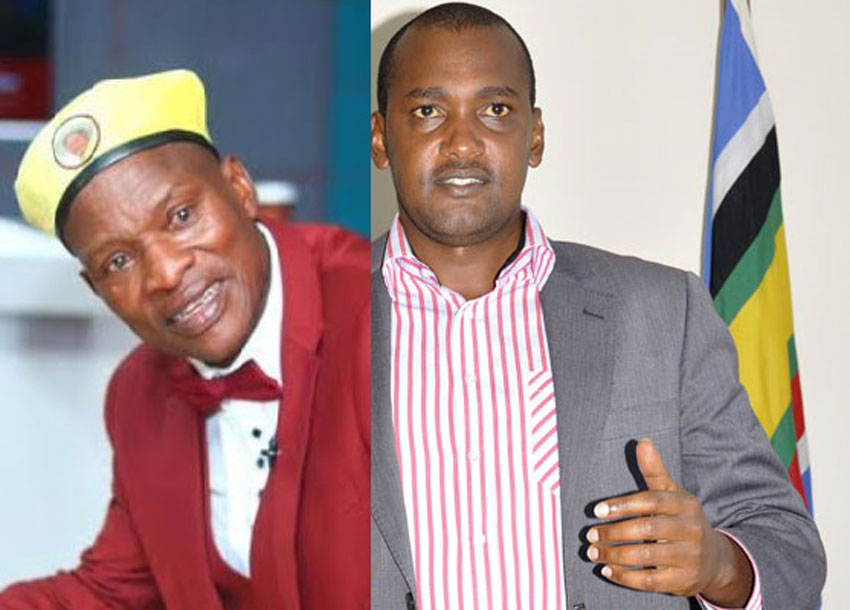 The Minister of Gender,Labour and social Development Frank Tumwebaze has said that he is not moved by the numerous attacks from former senior Presidential Press Secretary Tamale Mirundi.

Over the years, Mirundi-a controversial political analyst has been accusing Tumwebaze of being part of a powerful mafia clique that has done more harm than good in making his life miserable in Uganda.

And the latest development of kicking him off air from all radio and TV stations in Uganda has made it worse.

According to sources, Mirundi was ‘reported’ to President Yoweri Museveni as a person spreading propaganda and sabotaging messages against some government plans and officials through his various shows on radio and TV stations. The order to have him scrapped off-air allegedly came from the old man on the top.

Following the incident, the motor-mouthed senior presidential advisor on media issues named six of his enemies who are working around the clock to ensure that he is no more.

Although Mirundi says his differences with the six people are irreconcilable, and because they humiliated him, he doesn’t state the Genesis of his fights with them since all seem to come from different walks of life, save for Gen Proscovia Nalweyiso and Lt.Col Edith Nakalema who work in State House. Tumwebaze is a politician and a former line minister while the rest are journalists like himself.

However, in response to Mirundi’s allegations, Minister Tumwebaze has disclosed that he has ignored Mirundi for the last eight years when he started insulting him.

“He is non of my business. So if he has wars with others don’t drag in my name. His insults mean nothing. My actions define me not just mad of haters,” Tumwebaze said on Tuesday.

MIKE SSEGAWA: Tamale Mirundi lies about the audio recordings of his so called ‘Mafia gang’

Renowned political commentator Frank Gashumba has congratulated the National Unity Platform party upon getting another contender for it's Presidency in...

News reaching our desk indicates that Forum for Democratic Change-FDC General Secretary for Bugiri District Eunice Namatende has finally made...