by Stephen Kalema
in News, Politics
12 0 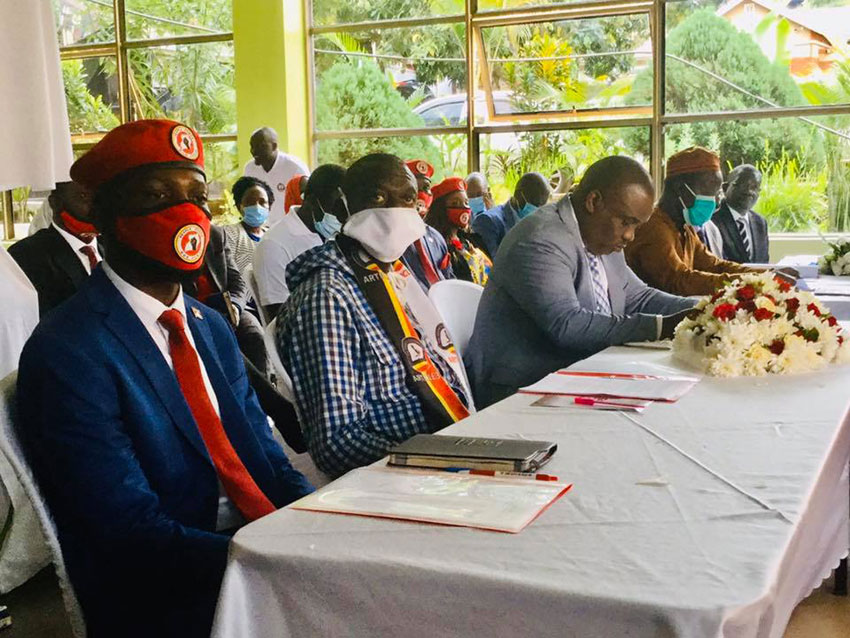 While addressing a press conference at Rose Garden in Wakiso District, Bobi Wine said that to win the current NRM government, the opposition needs to unite as well as let go of wrangles among themselves..

“We ask our comrades the agents of change who have been clashing with each other, that this sign should teach you that we are not each other’s enemy. Our enemy is known and all guns should be aimed at him,” he asked.

Besigyeon the otherhand thanked Bobi Wine and the People Power movement for being patient and committed  towards the liberation of Uganda.

“Your persistence despite lots of difficult has enabled us to come together. This is a wonderful moment for our country that we can unite and tell the country that enough is enough,” the four time presidential candidate said.

Following the new political coalition, a section of opposition supporters have asked Besigye to support Bobi Wine if they are to reap fruits out of it.

“I trust Bobi Wine but please don’t trust that Besigye unless using him as a ladder if you go to state house INSHAALLAH. But Besigye is a crook in politics Bobi Wine should go slow on him,” Denies Katamba said.

Umar Katamba said, “This is an unreasonable issue because we have ever had about the same scenario when Besigye wanted to be with Amama Mbabazi to work together and fail because of greed from Besigye so, this time Besigye should just guide Bobi Wine.”

“This is a long-waited idea which all Ugandans have been yearning for as united forces of change and to us, we knew HE Bobiwine could sample Ugandans with his leadership skills by uniting all forces of change which he has done already now all our eyes and efforts back to dictator long live our principal,” said Gerald Sengero.

Selemba Hamzah said “The issue here is not about Bobi wine or president kizza Besigye, please. It’s about different political ideologies that you see from people’s Government Jeema Dp justice forum etc. That came up and agreed to defiance as it has always been preached to end Museveni,s rule.”

Lutaya Henry Mary said “Let’s welcome this and call upon all other political parties to join efforts too with them. I thank Dr Kizza Besigye for seeing that he should leave the young generation to take the lead this time. We need one candidate against President Museveni and he should be Hon Kyagulanyi.”

“A Coalition of the ‘United Forces of Change’ will give supporters assurance that the leaders of the opposition are not enemies of each other & are working together,” said Rita Kase.