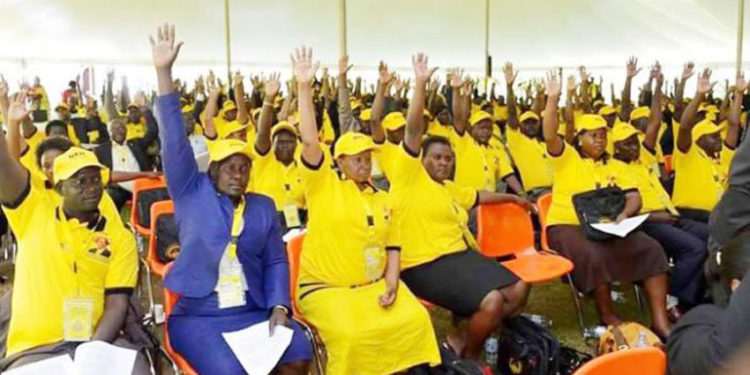 Reports that parliamentary reporters accepted Shs100,000 each to keep quiet about the much rumoured about Shs40 million each of the 317 National Resistance Movement (NRM) MPs reportedly got from the party for voting to remove the age limit clause from the Constitution in 2017 have been discussed for days.

The removal of the age limit made President Yoweri Museveni who has ruled Uganda for about 35 years eligible to stand in next year’s presidential election. In a recent media interview, Museveni who is 75 years of age said he was fit to stand for reelection.

After they had removed the age limit, the MPs were praised by their President and Party Chairman but a cash reward had not been received. However, the recent Shs 10 billion Covid19 scandal in which Parliament illegally awarded each MP Shs 20 million to help in efforts aimed at fighting the spread of the disease left some of them in trouble after they were ordered to take it to their respective District Covid Taskforces yet they had already spent it.

The MPs were also angry with Museveni to the extent that they passed a motion to express displeasure in the President and advised him to always write to Parliament instead of embarrassing the House in public like he did in his April 28 address in which said it was morally reprehensible for MPs to award themselves money when Ugandans were starving due to Covid lockdown.

Later, Museveni proposed that Covid constituency taskforces should be set up to be led by MPs and each should get Shs 40 million to help overcome pressures from their voters.

Although NRM committee chairperson rejected this proposal and told Museveni to revive the Community Development Fund, some members of the NRM Caucus like Chief Whip Ruth Nankabirwa, her deputy Solomon Silwany and publicity secretary Margaret Muhanga reportedly resurrected the matter of the reward for to the party MPs who stood with Museveni during the contentious process of removing the age limit clause from the Constitution.

Reports claim that Museveni was non-committal during the meeting in which the matter came up as a way of saving MPs but the money was later authorised from the NRM treasurer to the 317 MPs, according to some rebel MPs and opposition members. But Nankabirwa has publicly dismissed the claims.

Under the Shs 40 million scandal, Parliamentary news reporters were also caught up. Social media conversations that have been shared widely online suggest that each of them got Shs100,000 to keep quiet about the story of the cash bonanza. Some were reportedly annoyed with NTV Uganda’s Herbert Zziwa for reporting the story on Friday.

In a Whatsapp group named Press Plenary administered by Uganda Parliamentary Press Association (UPPA) President Moses Mulondo of the New Vision and Rachael Nakasi of Bukedde TV, members thank UPPA of helping them get the Shs100,000. One of the reporters named Daniel Mugoya even thanks Mulondo “for contributing a smile to my night.”

But Mulondo now claims that the money was meant to help parliamentary reporters go through the Covid19 crisis after some were stopped from accessing Parliament premises, reducing the numbers from 270 to 50. He added that the cash was not a bribe from NRM, but a donation from Parliament department of Communication and Public Affairs.

“We have not received any bribe and we have not asked anyone anywhere not to write about the story of Shs 40 million. Actually, yesterday, the story ran on several media and it was reported by parliament journalists,” wrote Mulondo in a statement.

“The fact is that about three weeks ago, Uganda Parliamentary Press Association (UPPA) wrote to the Parliament department of Communication and Public Affairs to raise some funds as part of the corporate social responsibility to give some small relief to UPPA members, majority of whom are no longer working.”

But those opposing this line of thought wonder if this was just a coincidence that the Shs100,000 came at the same time when the NRM MPs reportedly received the Shs40m each. They also argue that the fact that some stories about the scandal later ran doesn’t mean that the journalists were not bribed but rather means that they had no option after the public learnt about both the bribe and the cash for Museveni age limit MPs.

Mulondo also said that the Shs 40 million was not channelled through Parliament and therefore the money given to reporters would not have been for the NRM MPs cash bonanza.

“We are also aware that the institution of Parliament has nothing to do with the handling of the said sh40m. The reports of that money are from places outside Parliament,” he further said in a statement.

However, those who insist that the reporters were bribed further argue that the channel through which the Shs100,000 came through might have been a way to hide or disguise its source, and that it wouldn’t be surprising if the bribe passed through any office at Parliament.

MC Kats was indeed not good for me, I deserve a better man – Singer Fille reveals