Why RDC Sakwa and Other Besigye tormentors have ended up suffering 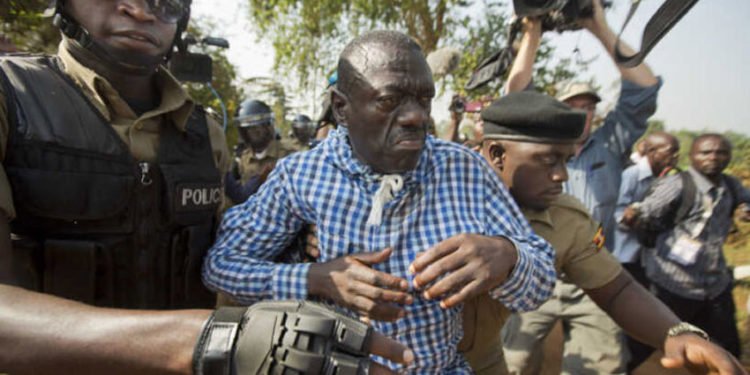 Dr Besigye being arrested by police a few years ago

The dramatic arrest, swift production in court and remanding of Eric Joseph Sakwa, the Jinja Resident District Commissioner (RDC), over charges of manslaughter have revived debate on why most officials in security and politics who torment opposition leader Dr Kizza Besigye end up badly.

On Friday, operatives arrested Sakwa in Jinja and drove him to Jinja Magistrate’s Court where he and his co-accused – Bumali Bazimbyewa alias Chris Umar Dindodi and Mohammad Simba alias Meddie –were charged with manslaughter, theft of waragi and malicious damage of property, and remanded to Busesa Prison until May 13. Sakwa, a former UPC youth winger, was arrested following the demise of a one Charles Isanga who had died due to injuries sustained after being tortured by the RDC.

As operatives picked him from a radio station in Jinja, locals gathered in celebration against a man they accused of going too far in the implementation of President Yoweri Museveni’s Covid19 directives, and harassment of government opponents.

Sakwa is the latest on the long list of people in the Museveni government who have ended up badly after years of suffocating four-time presidential candidate Dr Besigye’s political rights. In February 2020, Sakwa banned Besigye from going to Jinja and holding there rallies, calling him an unwanted ‘desert locust” whose behaviour was “satanic.’

Then, Sakwa said: “Although we want visitors, Besigye is no longer welcome. He causes chaos and mobilizes boda boda men to riot. He paid people to show Uganda that he is loved. This is not only uncouth but also satanic in nature. He is not loved and he is not welcome because he behaves like a desert locust, only spreading around in various areas to disturb peace.”

Besides Sakwa, its latest addition, the list includes former police chief Gen Kale Kayihura who was responsible for supervising the arrest and detention of Besigye for 12 years. But Kayihura was disgracefully sacked at the height of his bickering with then security minister Lt Gen (rtd) Henry Tumukunde in 2018. Kayihura was later arrested and charged with failure to protect war materials and aiding the kidnap of Rwandans from Uganda to Rwanda.

On the list is also Gilbert Arinaitwe Bwana who is remembered for dousing Besigye with pepper during the 2011 walk-to-work protests. Bwana reportedly ran mad, was later netted for raping a school girl before he got born again and reformed.

Other tormentors include former Kampala South Regional Police Commander Siraje Bakaleke who Police declared a deserter after he survived arrest over his involvement in a gold scandal involving South Koreans. Bakaleke was on several occasions responsible for issuing orders restraining Besigye’s movements and commanding operations to arrest and detain the politician.

But as the list continues to grow, many are puzzled as to why exactly Besigye’s tormentors end up suffering. Several arguments have been put forward. For example, his critics claim that Besigye, Museveni’s former personal physician, is working with the president behind the scenes, and therefore all those who torment him are bound to suffer punishment. The opposition leader has severally dismissed such allegations with the contempt he says they deserve.

Responding on Friday’s events, Besigye said the RDC’s arrest “reminds me of very many before him, some on the run, in jail or dead!” He added that Sakwa’s latest woes came “as a twist of his fate” because “he was arrested by officers from State House, that he seemed to believe he was acting in their interest.”

It is the same thing people like Kayihura thought they were doing (defending the interests of- and working to please – the appointing authority. But as Besigye concluded, “time comes” when the master no longer sees such a servant as useful. Then it is the time for people like Sakwa, a former opposition youth winger lured to Museveni’s camp to reportedly undermine the opposition, to be dumped and account for their sins as individuals.