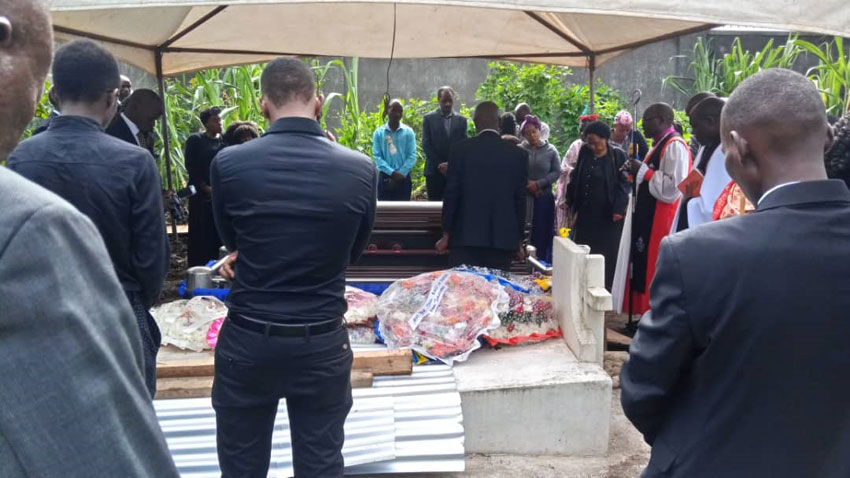 The late Ntabgoba's burial on Thursday

President Yoweri Kaguta Museveni has described the fallen first Principal Judge of Uganda Justice Herbert Ntabgoba as a true patriot who put the nation at the forefront while exercising his duties.

President Museveni said on Thursday that the late Ntabgoba was a principled, incorruptible judge who executed his duties well.

“The late Justice Ntabgoba was among the incorruptible judges in the country who executed his duties putting the country at first in all what he did as other judges need to learn from him he has left a legacy. He has been known every where,” said president Museveni.

This was contained in his message read for him by the Bufumbira East MP Dr James Nsaba Buturo at Ntabgoba’s burial ceremony that was held at  ancestral home in central division kisoro municipality.

His lordship the Bart Katureebe the chief justice of Uganda in his message said that the fallen Ntabgoba served the country diligently for over 31 years in different aspects being the first principal Judge between 1989 to 2004 when he retired.

“While the death of a beloved one inflicts a lot of pain we are comforted by the fond memories and his great contributions to the nation. I pray the almighty God fills the void that has been. Left by his demise with the holy spirit and give the family fortitude to withstand the pain”. Said Justice Katurebe.

Rt.Rev.Cranmer Mugisha the Bishop of Muhabura Diocese said that people need not to forget where they came from when they get into big offices Saying that even though Justice Ntabgoba was a big person in the nation holding big offices he kept the touch with his people and that some when they get to big offices they also forget the church but him he kept supporting the church.

“I knew him personally even though he is a big man in the country he knew God and kept on supporting the church unlike others after getting in big offices tend to forget he was a very kind man they did a lot to help others and he kept his as he used to give a lot of support as the good thing he went when he was saved”.said Bishop Mugisha.

Justice Ntabgoba passed on 12th April 2020 at International Hospital Kampala – after suffering a stroke in December 2019. He had for long battled diabetes and pneumonia.

Justice Ntabgoba at the time of his demise was aged 81-year-old was born in present day Kisoro District on July 21, 1939 to Zakayo Bakunzi Rugiriki and Maria Bakunzi Nyirajana.

In 1976, Ntabgoba was the recipient of the Distinguished Service medal of the Government of Uganda. He was also certified in intellectual property from Australia.

From June 1, 1981, to August 31, 1987, he served as the first Director-General of the African Regional Industrial Property Organisation (ARIPO), based in Harare, Zimbabwe.

The African Regional Intellectual Property Organization, is an intergovernmental organization for cooperation among African states in patent and other intellectual property matters. At the time he was serving as Puisne Judge, a position he held up to 1981.

In 1989, he was appointed as the first Principal Judge, a position he held for 15 years.

Upon retirement in 2004, he worked as a consultant for one of Uganda’s largest law firms- Kampala Associated Advocates, mainly on intellectual property matters.

He has been described by members of the law fraternity as a principled Judge, who was hard working and exhibited high levels of integrity.

Justice Ntabgoba who graduated with a Bachelor of Laws degree from the University of East Africa, Dar Es Salaam, Tanzania in 1966, is survived by a widow, Jeninah M.N. Ntabgoba and six adult children (four daughters and two sons)

Uganda Cup: Vipers, Soana qualify for round of 16 as record winners Express bow out