by Lawrence Kazooba
in News
12 0 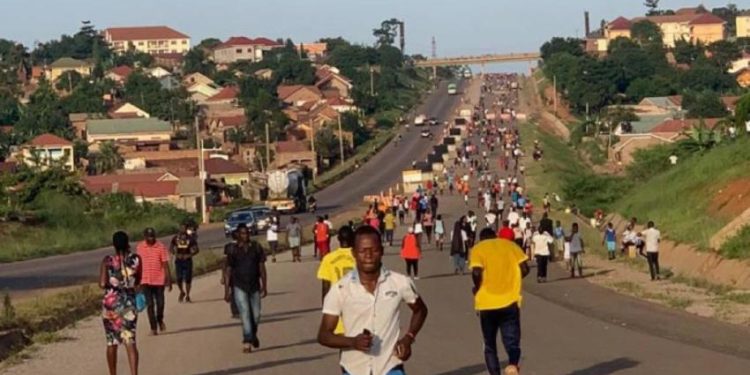 President Yoweri Museveni has banned the popular physical exercises around Kampala and Wakiso every evening since the lockdown was announced.

There has been ongoing complaints about big crowds who invade the Northern bypass in the evenings to exercise. The crowd runs so close to one another between Namboole stadium to Kiwatule round about.

Police and ministry of Health have been reluctant to stop the groups, saying exercises are healthy as long as they kept distances.

However the groups have not been disciplined to keep the distances.

Museveni, during his Covid-19 address to the nation on Wednesday evening, said these public gatherings were unacceptable because it would reverse gains made in the fight against Covid-19.

Museveni announced 53 people have tested positive for the Coronavirus but was happy with gains made.

Museveni said Uganda is prepared for any outbreak and he says Uganda has built capacity from the past outbreaks.

“We don’t send tests anywhere but here,” he said.

The president also ordered an end to police beating up people found contravening the lockdown directives. He asked for arrest and charge of these people instead of beating them.

This is a health emergency, and it’s a grave mistake to allow people to spread the virus.
“It is attempted murder,” he said.

But, Museveni said, suspects should be handled the legal way.

“Don’t enter every home but go into homes with reasonable suspicion with a search warrant”, he said.

Museveni also warned security for failing to do something about the situation.
“I will charge you with mutiny for striking,” he said

“Don’t go from one extreme to another,” he said.
The president said beating was giving Uganda a bad name internationally and locally.