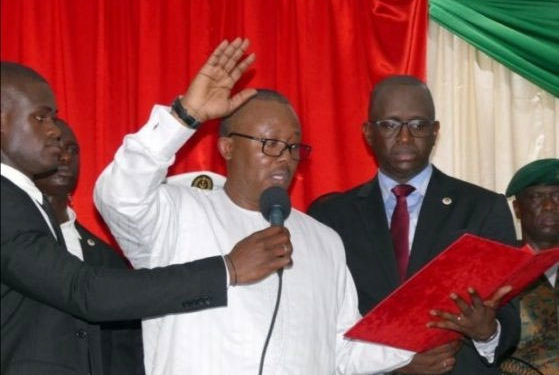 Cipriano Cassama during his swearing in on Friday

ShareTweetSendShare
Guinea-Bissau Interim President Cipriano Cassama has stepped down amidst security concerns, two days after he was sworn into the post.

Cassama was sworn in by lawmakers late Friday after the ruling party deemed the swearing in a day earlier of Umaro Sissoco Embalo, the winner of December elections, was illegal. Cassama said he would retain his post as parliament speaker.

The tiny West African nation has been in political turmoil since a Dec. 29 runoff-vote between the ruling PAIGC party leader Domingos Simoes Pereira and Embalo, with Pereira claiming the vote was fraudulent and demanding a recount.

The political feud is threatening more turmoil in one of the world’s poorest countries, which has previously been a haven for gangs smuggling cocaine from South America into Europe. Record cocaine busts in Guinea-Bissau and Cape Verde last year have fueled fears of a resurgence of drug trafficking in West Africa that’s likely to benefit Islamist militants in the region.