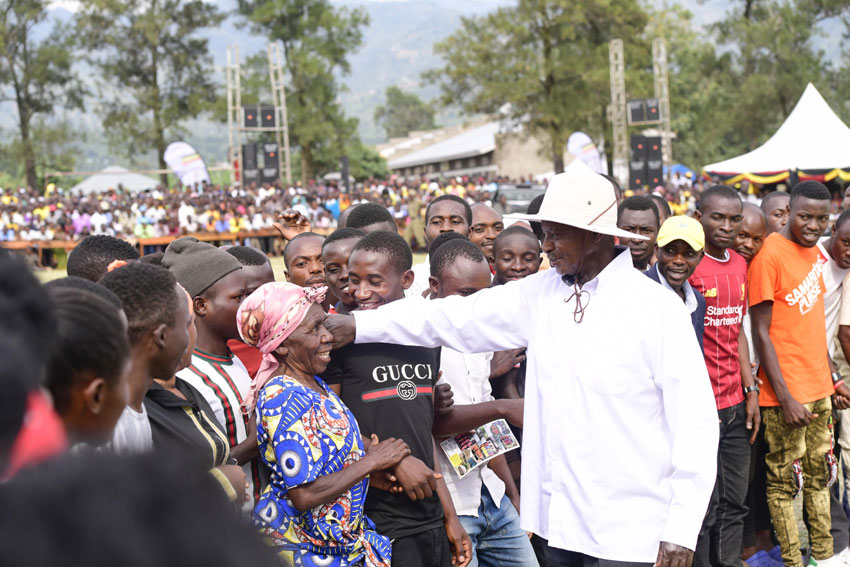 The President also made a government contribution of Shs 370 million towards its completion, construction of school laboratories of Bwera Secondary School and the refurbishment of Kitalikibi Primary School.

The President said 250million will go towards the construction of science laboratories at Bwera S.S.S, Shs 60 million towards completion of the girls hostel and another Shs 60million towards the refurbishment of the Primary school.

Addressing a public rally at Bwera Secondary school grounds, the President Museveni reminded the people that the NRM govrnments role is to guide the people on development and economic transformation.

“Since its inception, the NRM’s primary role has been to guide the people on government development plans including enhancing education, engaging in modern agriculture production for economic transformation for prosperity and addressing the growing problem of land fragmentation due to increasing population in the country”, he said.

He urged the people of Kasese district to learn from the farmers in the community who correctly picked the gospel of wealth and job creation at household and are reaping about Shs 120 million per year in two seasons from crops such as apples, mangoes, coffee etc.

On the issue of infrastructure development, President Museveni informed the people of Kasese district about Uganda and the DRC government development partnership, saying that he has discussed his counterpart President Felix Tshikedii about the two roads connecting the border post of Mpondwe and Beni and that of Bunagana and Ngoma which will be tarmacked including the construction of the bridge on River Semliki linking to Bundibugyo district.

He also informed the people of Kasese district that the old Equator road, which is an access route for tourist sites, would be re-tarmacked soon since the design work is ready pending the construction to begin.

The Uganda Ambassador to China, Dr. Chrispus Kiyonga saluted the president for supporting the development of the area saying that the fundraising drive was meant to upgrade the three educational institutions in Bwera, West Bukonzo county, Kasese district.

He said the ceremony fetched Shs 540 millions out of the targeted amount of Shs 654 million.

The Deputy Headmaster of Bwera S.S.S, Mr. Yokonia Bwambale thanked the President for his contribution and for honouring their invitation.

On behalf of Kasese district community, the leaders of Kasese district elders’ forum led by Yosia Kireru handed gifted the President various cultural items symbolizing authority and expressing their confidence in his good leadership of our country.

Earlier on arrival in the district, President Museveni made stopovers at both Rusese airfield near Bwera town council and Bwera Township where supporters had gathered to receive him. He thanked them for supporting government education and general infrastructure development.

The supporters of Speaker Kadaga have showered praise to Mukono Municipality Member of Parliament Betty Nambooze for revealing the bitter...

MPs have created five Parliamentary seats for elderly persons, one of which has been ring-fenced for women. Every region including...