I survived death because of my car number plate – Rev. Mwesigwa

by Stephen Kalema
in National, News
44 2 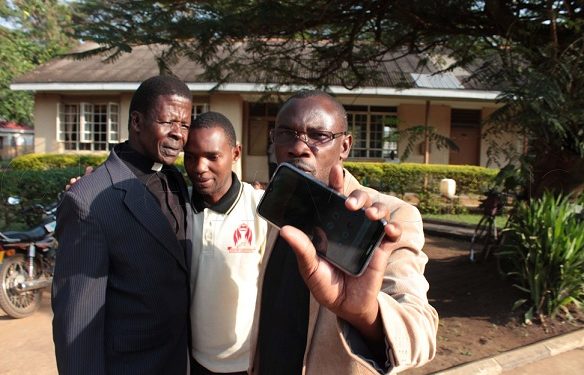 A Reverend who went missing surfaced at the premises of a church in Soroti on Wednesday after days of intense searching.

Rev Isaac Mwesigwa of Kasaka – Gomba, Central Buganda Diocese and a student at Uganda Christian University (UCU) was reported missing on Sunday, at around 9:00 pm in Sonde Mukono.

He narrated that on February 9, 2020 as he often did every Sunday, after church service, he embarked on a journey to UCU.

However, along the way he says was stopped by three men who were holding guns. Mwesigwa narrates that he was full of fear and locked the car. He immediately called his uncle for a piece of advice.

“I called uncle and I told him, I see three men holding guns but dressed casually coming towards me now, what can I do? As I was still on the phone they had already reached my car door. They banged it with a lot of force but I told them, ‘don’t break-in let me open peacefully’,” Mwesigwa narrated from Soroti in an interview aired on NTV on Wednesday night.

He said that he left the phone in the car, a white Raum registration number, UAR 468D – and got out of the car. Since he had not parked well by the time he was stopped, they told him to first get in and park it well.

After parking the car, he was blindfolded and driven off into the deep of night.

One of the three gunmen told the other two that they should just kill him and take his body.

“I pleaded with them while crying for my life, telling them that I’m innocent. I said ‘I don’t know what I have done, please don’t kill me’, until one of them said, ‘let’s take him alive’,” said Mwesigwa.

“They then took me into a dark building, where they tied my mouth and blindfolded me again. I could not see but my ears were active. I only knew that it was morning (on Monday) when birds started chirping. I cried the entire night. I did not sleep. They then took me to another place.”

“At the new place, they called someone they referred to as ‘chief’. On loudspeaker, ‘Chief’ furiously told them that they had brought the wrong person for which they apologised,” he said, adding that ‘chief’ then asked asked him for his car’s registration plate.

“I told him UAR but before I completed the last digits, ‘Chief’ immediately attacked the three gunmen and told them ‘I told you UAP not UAR.’ The three men told him they had seen UAP,” Mwesigwa narrated.

He was then driven and thrown into the premises of  Soroti Church of Uganda from where the church leadership of Soroti handed him over to the police who contacted his relatives.