The state minister for Environment, Beatrice Atim Anywar has cautioned people settling in wetlands that their  time is up.

Anywar, who was speaking at the finish line of the Running Out Of Tree (ROOT) marathon in Gulu on Saturday said that most people who destroy the environment, by cutting trees and building in wetlands always used the excuse of ‘order from above’.

“The honeymoon to whoever settled in wetlands with the ‘order from above’ excuses is over.  President has already given us the order and there will be no more talk of ‘order from above’. That one is no longer going to help anyone,” she said.

She added; “We need to leave a better Uganda to the children we have brought in this world and this work must start now. Time for speaking is over. Gulu has had the mass cutting of trees for charcoal, timber and logs we need to find a solution for this vice.”

In a bid to restore Uganda’s forest cover and conserve the environment, Uganda Breweries Limited (UBL) pledged to work with the government, other corporate companies and citizens countrywide to grow, restore and conserve 40 Million trees around Uganda every year for the next five years. 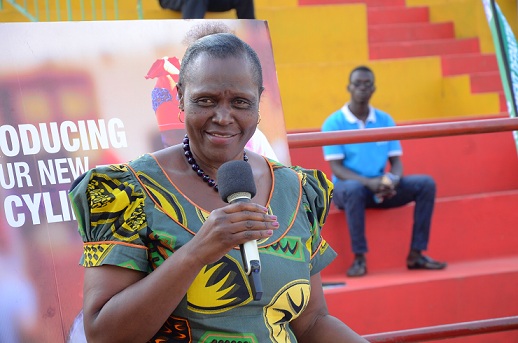 The pledge was delivered by a group of runners who were flagged off from Kampala by the Speaker of Parliament Rebecca Kadaga and delivered in Gulu after a two-day 330-km long relay Marathon.

After receiving the pledge Anywar said “The rate of deforestation in Uganda is high and the country will soon be water-stressed if citizens do not pay due attention to environmental management. Kudos to the organisations that have today pledged to conserve the environment. All other organisations ought to take up tree planting as a priority to manage the current climate change challenges.”

She also noted that planting new trees isn’t only essential in the fight against deforestation but to ensure that Uganda’s abundant diverse wildlife has a habitat. And it’s also crucial for the health of the citizens and country; more trees on the planet means more carbon being removed from the atmosphere and a more stable climate.

UBL Managing Director Alvin Mbugua also expressed his gratitude to all the participants in the relay and told them the running is the only way Ugandans can walk the talk by raising campaign for awareness about the risks of cutting trees.

“The demand for timber and firewood, land for agriculture and other human behaviours have seen Uganda lose an average of 96,000 hectares of forest cover every year. The government has the challenge of restoring the forest cover and making Uganda green again,

“Uganda has over 40 million people. If each of us helped to plant and look after at least one tree, we would have planted 40 million trees or about; a big contribution to increasing forest cover and combatting climate change,” Mbugua said.

Meanwhile, the Gulu District Chairman Martin Ojara Mapenduzi encouraged everyone to support the government to protect the environment and reforest for the benefit of future generations. He also called for greater awareness and education in the region about protecting forests at both community levels and schools.

Lost glory: Who is to blame for Masaka's football woes?