The officers from the ranks of Police Constable to Assistant Superintendent of Police were drawn from the Kampala Metropolitan Region and 32 from the Greater Masaka area.

“It’s with great pleasure that I represent the IGP as the chief guest at this closure of basic security management course, the first task to preside over a police function as Deputy Inspector General of Police, what a beautiful welcome.” Sabiiti said.

He added,. “This course derives from the police council meeting requiring all police directorates, units, and regions to conduct regular internal capacity building programs for the personnel. I intently observed what you have been able to achieve in a mere period of two months and I must tell you, I am very happy. Sabiiti pledged total support for the program as a way of professionalizing the Uganda Police Force. To the trainees, go and apply all the skills and knowledge acquired for the benefit of the community that we serve.

“Endeavor to remain healthy so as to serve longer and look after your families. There is a very serious problem of Hepatitis B. It has a vaccine so it’s important that commanders make sure that people are checked and immunized. HIV/Aids is still a threat and it kills and demobilizes. If you have it, don’t go and lock yourself in the house.” he said.

Kampala Metropolitan Police Commander, CP Frank Mwesigwa in his address said “This course came up as a result of training needs assessment. We conducted after testing the field and seeing that there is a lot of work that must be done by us the Commanders. Some challenges have been talked about like lack of team cohesion, fitness poor response, so after appreciating all these challenges we said we shall not sit and that’s why we are here today.
So far, we have trained over 1,000 officers and our dream is to train everyone because this is the basic foundation and if not laid properly, ultimately we cannot achieve a lot, and professionalize the force in professionalizing the force.”

Mwesigwa added that the training will also address operational mistakes that have been done in the field for a long time like the way officers hold weapons, shooting people mistakenly and the dress code among others. “So this course addresses all that and so, use the skills to build the name of the institution and our mandate as police officers.” he added.

The officers were trained in weapon handling, martial art, self defense and Public Order Management among other areas. 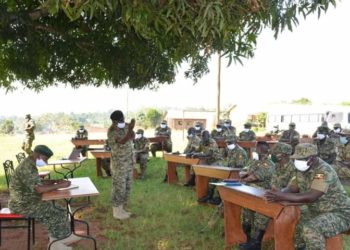 The UPDF Chieftaincy of Pension and Gratuity (COPG) on Monday kicked off a 20 day retirement documentation exercise at 1st...