by Allen Kisakye
in Entertainment, Showbiz
56 2 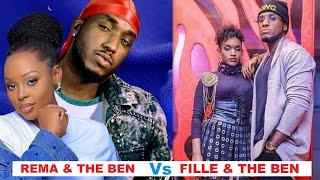 Uganda’s finest song birds Rema Namakula and Fille Mutoni are reportedly not seeing eye to eye after being ‘played’ by a Rwandan singer The Ben.

A few weeks ago, Rema and The Ben released their hit collabo ‘This is love’ which is currently on top of all music charts. It’s said that this is where Rema and Fille’s issues started from.

Rumours have it that a few months ago, The Ben recorded a song dubbed ‘This is Love’ with Fille and it was left with only a few touch-ups to be released officially.

But in the process, The Ben was tipped off that if he wants to conquer the Ugandan music market, he should work with the best “Rema”, so the Rwandan heartthrob ditched Fille and re-recorded this song with Rema, in just a few weeks both audio and video were out.

It’s alleged that Rema’s betrayal left Fille, together with her baby daddy MC Kats who had invested heavily in that project not happy, wondering why Rema could do such a thing to them.

However, despite the rumours, all parties involved (The Ben, Fille, Rema, MC Kats) have not officially come out to clarify on what really happened and how they are going to go past this saga.

The Ben isn’t new to Uganda’s music industry as he has done several hit collabos with artistes who include Sheebah (Binkolera), B2C Entertainment (No You, No Life), among others, and his latest collabo is with Rema.

The only plan I have is to remove Museveni out of power in less than a month, says Bobi Wine as he trashes ‘Plan B’ talk