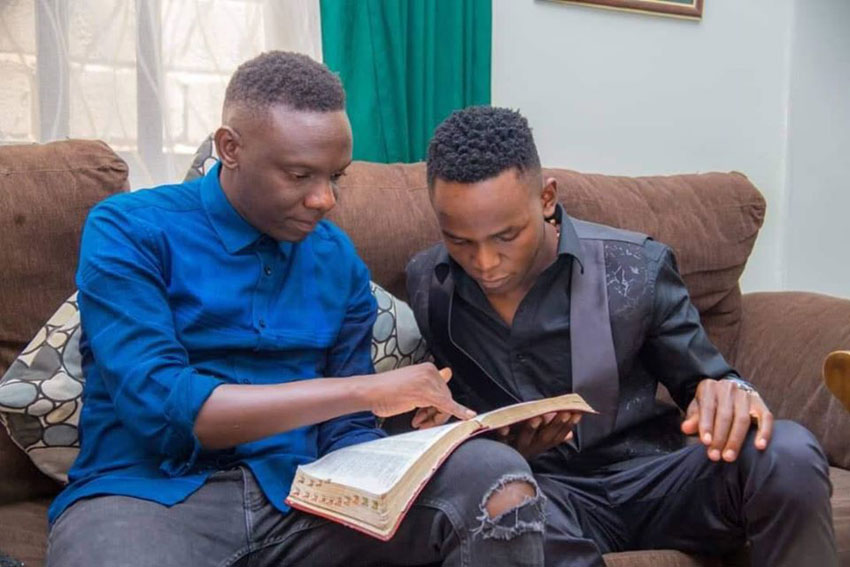 However, all did not go well because the ‘Hullo’ singer panicked in his introduction and made a mistake that NBS TV managers must have cringed in their seats if they were watching the live church service that also featured the ‘Wulira Ebbaala’ hitmaker Suspekt Leizor.

After praying for Covid19 cases to reduce and telling social media users to desist from mocking Nansana in favour of Najjera, Pastor Bugembe invited John Blaq and Suspekt to join him on stage. He first asked Blaq to say hello to the online church.

To the ‘Bilibabitya’ singer’s and the viewers’ shock, John Blaq said, “Praise God, dear NTV viewers.” Pastor Bugembe rushed to correct him but it was too late. The singer, who has recently been in trouble with his managers over his social media pages, financial and sexual scandals, realised he had made a mistake which visibly made him look ashamed of himself, but he later composed himself and encouraged his fans by reading the day’s scripture.

The competition between NBS and NTV has of late been so fierce that such blunders have become common. In one of the recent live shows for the battle of lockdown weekend nights, Jose Chameleone thanked NBS TV while he was appearing on NTV Uganda. Also, an NBS TV producer who had been tasked to come up with a clip showing the NBS crew carrying a coffin marked NTV to the grave to show that NBS had defeated NTV in the battle for the Friday night spot shocked many when, possibly working under pressure, came up with an NTV crew carrying a coffin marked NBS TV to the burial ground, and the clip aired to the embarrassment of the Kamwokya-based station.

Meanwhile, John Blaq’s blunder came hours after NBS Saturday Night Live show crew was blasted for donning t-shirts reading ‘ALL LIVES MATTER’ instead of ‘BLACK LIVES MATTER’ in support of George Floyd protests. After realising their mistake, the station’s management apologised to their viewers and promised to up their game.

“Tonight on #NBSSNL, we rubbed many of our viewers, local and international, the wrong way when our team moved to don t-shirts labelled “All Lives Matter.” This was Not our intention, and the outcome is far from what is expected of us. We shall do better,” said NBS TV in a statement.

Stella Nyanzi: Bobi Wine's supporters will never allow him to stand behind Besigye

OP-ED: Will Africa keep up with the rest of the world?