by Allen Kisakye
in Entertainment, Showbiz
14 2 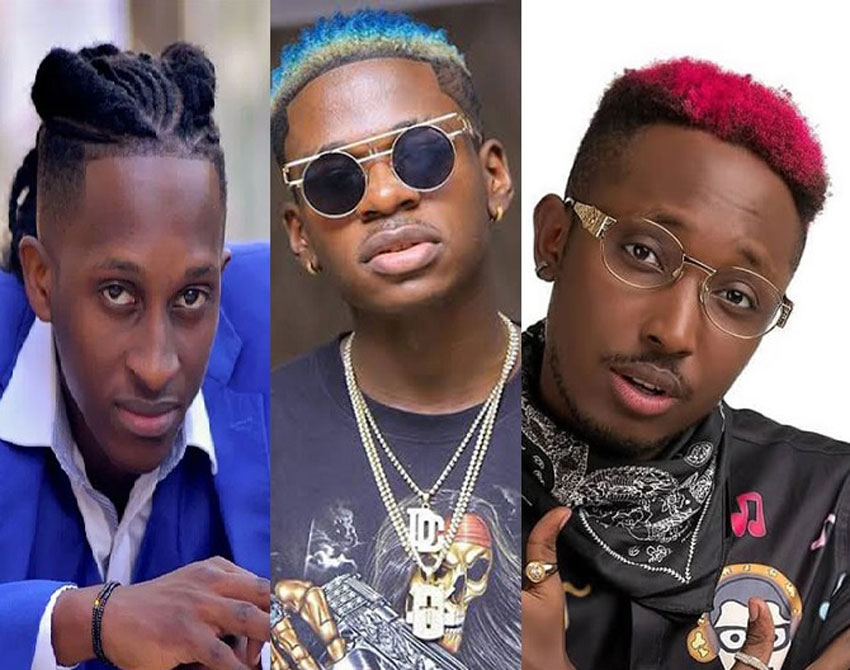 Its not news that our beloved artistes always do or use anything possible just to keep in the eyes of the public, even without good music.

We have seen an artiste who was shot three times in the stomach (he is still alive), another one hammered four times on the head (also alive), some stage people to throw bottles at them, among other things for showbiz news.

But singers Bruno K, Grenade Official and Chozen Blood possibly don’t have time for such daring tricks, however they mastered the art called women and love; and before you know it, they are making headlines everywhere.

One thing for sure, these artistes are so talented with good vocals, possibly the reason why ‘we fans’ are concerned about how their names are often mentioned in things to do with women other than music.

First things first, Do you know any 2020 hit song from these boys (Grenade, Chozen and Bruno)??, or we should wait for the lockdown to end? but at least I know you have hard trending stories about these guy’s rumoured relationships.

Let’s start with Chozen Blood, ever since this talented singer recorded a hit song, Yitayo Ondabeko with Winnie Nwagi in 2019, we don’t know what happened to him, the only thing left to report about this him is his rumoured relationship with Nwagi.

Recently through viral audio notes, Chozen’s said girlfriend alleged that Nwagi bewitched her man, and he is no longer the same. However, we cannot establish if the audios were real or it was another woman drama from this guy. As usual, instead of talking about new music, its always Nwagi Nwagi Nwagi……all the time.

Chozen blood aside, what really happened to Grenade Official? We can’t forget how he stormed the industry with hits all over like Nkuloga, Olimba among others, such a good and promising talent from a young man like Grenade, its so saddening that he is currently trending for dating older women.

We have taken sometime without getting a hit song from this singer, but talk about drama to do with women and love, Grenade surely knows how to play that game.

He first hooked up with AK47’s widow Maggie, claiming that he is planning to settle, but just after a few months, Maggie accused Grenade of stealing grasshoppers, among other things and before we knew it, the couple was going through a bitter fall out and social media was served with lots of drama.

Before we could get over that drama completely, the singer hooked up with Zari Hassan, and they both made sure that everyone gets to see their ‘lovie dovie’ moments so that we can start gossiping about it. Yes, we talked, debated, judged, commented, bla bla bla, but Grenade, can we talk about music now!

I sincerely don’t know when Bruno K last released a hit song, we were almost going to forget about him but luckily his ‘love’ for Faridah Nakazibwe bought him back in the news.

Given how he has been trending in the news as ‘Nakazibwe’s’ bae, the singer also got a chance to shine around, not forgetting how this love trend scooped him an interview on NTV Mwasuze Mutya, a show that he always dreamt about; this according to him.

We believe that given his talent, vocal power and guitar skills, plus this new management, we shall have lots of music to report about on Bruno K rather than Nakazibwe.