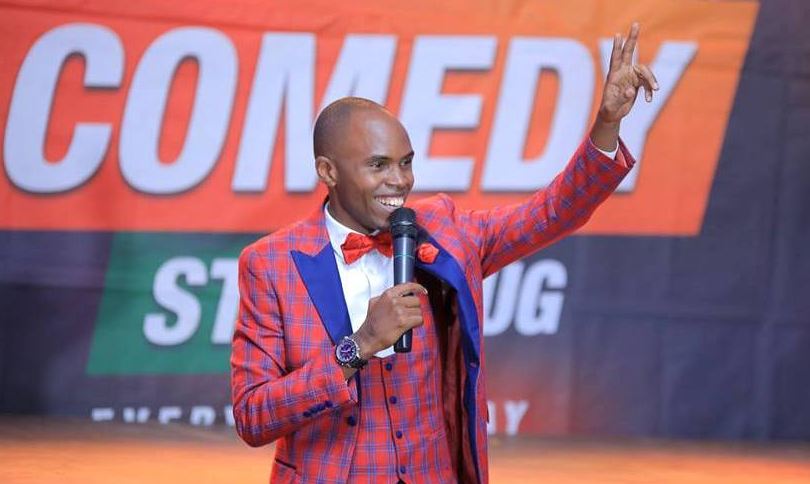 Standup comedian Alex Muhangi has upped his game following the competition he is heading into with fellow entertainers at the weekend.

The Comedy Store CEO is flying in Nigeria’s singer Rudeboy, a former member of PSquare for a show which will be happening at Lugogo Cricket Oval on Valentine’s Day (February 14).

But this day is fixed with a lot of shows, something that has pushed Muhangi to get creative so that he attracts more partiers to his show than the rest – Rema at Hotel Africana, Salvador will be at Kololo Airstrip for his Africa Laughs season Five, Maro will also be at Mestil Hotel Nsambya for his Anjagala concert and then Muhangi’s show.

Given the threat he anticipates from his competitors, Muhangi has gone creative and promised partiers that fun will only happen at Cricket Oval, Lugogo.

In a skit on which he features comedienne Martha Kay, Muhangi visited different rooms, allegedly where Rema, Maro and Salvador’s shows will be happening, and the ‘venues’ seemed to be boring, but when he entered a room where his Rude boy show was organised, the vibe was high.

He further shared on social media that ‘A short story about making the right decision on Valentine’s Day’, implying that people should flock his show for it will give them a memorable experience, more than other shows that will be held on that day.

However, Rema, Maro and Salvador have not yet responded to Muhangi’s ‘creativity’

People Power is not only for Baganda but for everyone in struggle, says Bobi Wine