People Power is not only for Baganda but for everyone in struggle, says Bobi Wine

by Stephen Kalema
in National, News
13 1 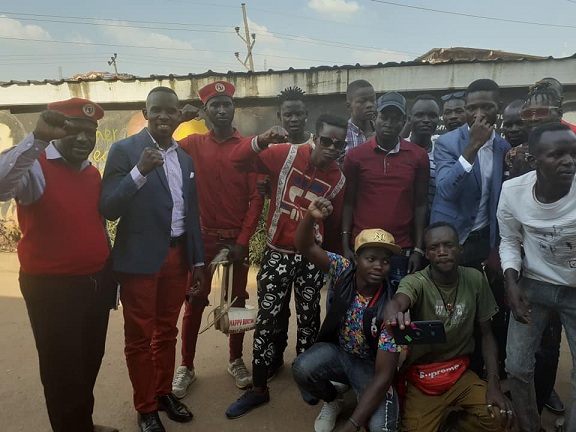 Bobi Wine (third from right) standing with youth from Karamoja, from left is Chairman Nyanzi and Joel Ssenyonyi the People Power spokesman

The Leader of People Power Movement, also a Member of Parliament Kyadondo East Robert Kyagulanyi Sentamu has attacked President Museveni for spreading sentiments of tribalism that People Power movement is only for Baganda people.

Kyagulanyi who is commonly known as Bobi Wine said that people in leadership from different regions of Uganda have seriously spread the gospel of tribalism trying to sabotage the pace at which the young people are joining the People Power movement.

Bobi Wine revealed this on Tuesday at Magere while meeting the team of young people from Karamoja region whose coordinators have joined the legislator.

“This is not a Baganda movement, the bad thing is that Mr Museveni has ruled this country with the colonial styles of dividing and rule. And has smartly come out with a narrative which has left this country divided into tribal sects which in future may lead to bloodshed or hate if we don’t destroy now,” said Bobi Wine.

He added that he is proud of being a Muganda as everyone could be proud of his/ her tribe. However, he said that when it comes to fighting for struggle Ugandans must be united and take away tribal sentiments which will leave them apart.

“We need to come together and fight if we are to see the struggle. People in the ruling party have set up narratives which have minimised our tribes. Because you are a Muganda, you are untrusted person, since you are a Musoga you are not smart till a certain age. Because you are from Karamoja, they will not wait for you to get informed or develop. Such statements have always been used to psychologically torture them and leave the struggle,” he said.

He added that the struggle is open to every Ugandan who feels that Uganda needs a change. At the same time, he has also expressed his disappointments on the way some people who chose to be coordinators behaviour after knowing that a struggle is genuine and not for making money.

“Most of the people whom we thought were genuine have certainly gone back because they thought they had come to harvest money but I confirm to you my brothers, that in this struggle we shall go with those willing to be with us and we are not forcing anybody,” he said.

His statement comes a few days after the Acholi star singer Bosmic Otim who had been given the role of a mobiliser in Northern Uganda, deserted People Power for National Resistance Movement. He later released a song in which he cast Bobi Wine as being too mean and not giving him money nor security yet his career was destroyed by the state for supporting People Power.