by watchdog
in Entertainment, Lifestyle
9 0 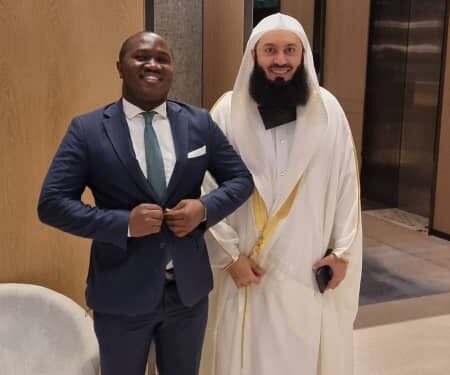 Mufti Menk has appreciated Next Media Services’ Pablo Bashir Sewalu for his outstanding expertise in doing his job as a Protocol Officer.

The Grand Mufti of Zimbabwe expressed his appreciation during the wedding of Sami Alam to Emaan in Dubai, United Arab Emirates. Sami is a son of renowned businessman Abid Alam.

Mufti Menk had been invited as the religious leader to preside over the wedding ceremony of Alam family’s Sami to his fiancé Emaan over the weekend in a glitzy ceremony that stretched out over several days.

Prior to the wedding, Mufti Menk had asked Pablo to help organise his trip to the UAE and liaise on his behalf between himself and the Alam family as they laid out how they hoped the nuptial ceremony would proceed.

The trust and appreciation should not come as a surprise as Pablo was at the centre of Mufi Menk’s second visit to Uganda in April 2021. Pablo was tasked to ensure that the revered Sheikh’s trip to Uganda was a success. He was on hand to ensure that Mufti Menk’s scheduled meetings with President Yoweri Museveni, religious leaders in the country and prominent persons like the Alam family went off without a hitch.

Most dear to his heart, Pablo saw to it that Mufti Menk did not miss the inauguration of Musa Quran Memorisation Centre in Uganda. Mufti Menk is famed for his charitable activities and likes to support centres that attempt to uplift the disadvantaged in their communities.

The celebrated but unassuming Mufti Menk who shirks an entourage had during his last visit quipped that Pablo was the only assistant he would consider hiring if he had no choice but to have an entourage after experiencing Pablo’s all round care while in the Pearl of Africa.

Pablo had also helped organise the smooth flow of Mufti Menk’s historic first visit to Uganda in 2019. In that first visit, Mufti Menk’s major purpose was to preach peace among the Muslim community due to the many differences in the fraternity back then.