As Next Media's Chief Protocol Officer, keen-eyed Pablo brings in clients and guests for media interviews. On top of that, he prepares the way for his boss Dr Kariisa and whenever he is travelling he goes there first to make sure everything is in place.

by Mubiru Ivan
in Entertainment, Lifestyle
3 0 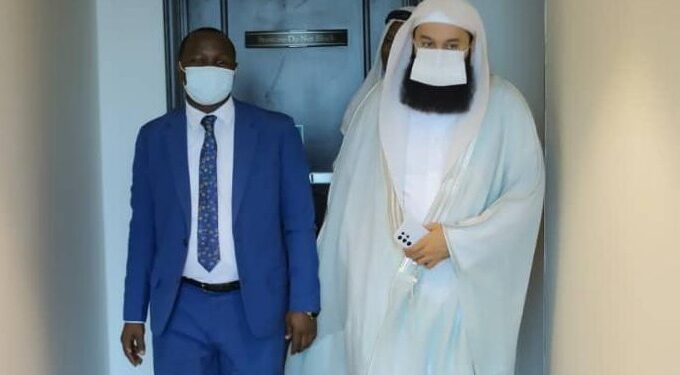 Do you know what it takes to be an admirable and exceptional Protocol Officer?

First, A protocol officer is the person that plans and orchestrates V.I.P. visits, ceremonies, meetings and special events. Each event they plan is driven with the expectation of diplomacy between the principal and invited guests.

Well, Pablo Bashir Sewalu has and still executes the role perfectly and he is one of the few protocol officers we have in Uganda who are on top of their game.

He has been in this business of ushering in highly sensitive high profile guests to where they need to be for more than 10 years.

Currently, Pablo works as Next Media Chief Protocol Officer. He was tapped for this position by media conglomerate founder and CEO Kin Kariisa.

As Next Media’s Chief Protocol Officer, keen-eyed Pablo brings in clients and guests for media interviews. On top of that, he prepares the way for his boss Dr Kariisa and whenever he is travelling he goes there first to make sure everything is in place.

Due to his experience in the field, Pablo tips you on how to become a fine Protocol Officer:

Pablo has been in the room with everyone from President Yoweri Museveni, Next Media Services CEO Kin Kariisa to prime ministers, ministers like General Katumba Wamala, police officers and he says what makes him welcome in these rooms is discretion. He has handled continental dignitaries like Kenya’s President Uhuru Kenyatta, his vice William Ruto. He has even had the honour of handling part of Pope Francis’s protocol during the 2016 papal visit to Uganda.

A protocol officer must be an expert at seeing and hearing everything while not talking about it. A protocol officer is like a bodyguard, the best are never noticed, they are the gel that puts at ease those in their care.

The best protocol officer will minimise to remove opportunities for faux pas to happen. On Pablo’s watch, his first priority is to get his guests to where they need to be and achieve what took them there. This is why Pablo never leaves the side or sight vision of the persons he is charge of be they delivering an important speech at a business lunch or appearing for the first time for a TV interview.

Having been around a dignitary for hours or years helps Pablo to ensure the environment around them at a highly stressful time will be as comfortable as possible. Equally important, he will organise the environs of the hotel or high stakes event in such a way that his principal is able to function and do what they are supposed to do there.

Pablo was on hand to ensure that the then Director General at Angeie-Primature in the Office of the President of Guinea Camara Namory had a memorable, productive visit to Alam group of companies. Namory met with the top management team of Alam Group of Companies before embarking on a tour of some of the group’s various business ventures.

Escorted by the senior Alam, Namory was given a tour of the Sugar & Allied Industries Limited whose lead product is Kaliro Sugar with Pablo overseeing every step of the visit.

Few skills are more necessary for the work Pablo does than diplomacy. His ability to bring down the temperature in a room is key as he has to work with personalities who are often on opposite sides of a political fight. Pablo is as comfortable in the company of fiery government critic Mathias Mpuuga (LOP) as he is with government spokesperson Ofwono Opondo.

The protocol officer must expect to mediate at some point in their career. Sometimes over a long span of time. Pablo relishes this challenge.

Pablo believes that many aspiring protocol practitioners forget it is as important how a guest leaves a location as they arrived. He argues that these final touches are what actually determine the lasting impression a guest will have of an occasion or service they have received while in your care.

This is why time does not matter in his protocol calling. Pablo will ensure that he is at the airport past midnight to receive a guest like revered Mufti Ismail ibn Musa Menk when he visited Uganda in April 2021. The celebrated but unassuming Mufti Menk who shirks an entourage congratulated his hosts on having the only assistant he would consider hiring if he had no choice but to have an entourage after experiencing Pablo’s all round care while in the pearl of Africa.

MICHAEL WOIRA: We are all colonies of Buganda, it has colonised us

MICHAEL WOIRA: We are all colonies of Buganda, it has colonised us