by Our Correspondent
in Community News
14 0 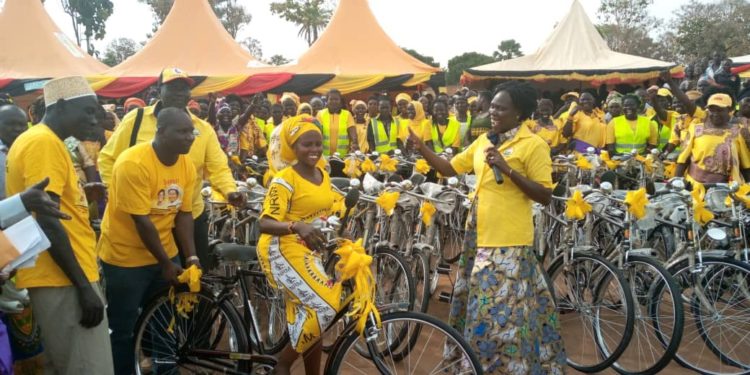 Some Local Council One and Local Council Two chairpersons in Koboko Municipality are planning to sell the bicycles that their area Member of Parliament, Evelyn Anite donated to them.

The bicycles whose cost and number was not established by press time were handed over to the LCs and religious leaders along with four motorcycles to Municipal and division task forces on last Saturday in a what Anite, the State Minister for privatization and Investment called an ‘accountability and thanks giving ceremony’ at Nyarilo Primary School play ground in Koboko North divison in Koboko Municipality.

These according to her, are meant to aid the local council chairpersons in mobilising communities for government programs and rally support for the National Resistance Movement (NRM) party.

Though they received the bicycles, the LC1 chairperson of Alimakodra Cell in Koboko North division, Abuyi Umar said he is surprised that they are being taken back to the world of bicycles when this is supposed to be an era of motorcycles.

“If I was not given the bicycles, I would not mind because there is no need for bicycle use in Alimakodra. I have three motorcycles and handed over one to my executives to help the community.”

Chairman Abuyi is hoping to sell the bicycle in exchange for motorcycle tyres.

The LC2 chairman of Isoko Ward in Koboko West Division only identified as Ayume said he will sell his bicycle to acquire iron sheets for his building currently at wall plate level.

Asked about whether the bicycles were given to the LCs as individuals or to their entire executives, the chairpersons boldly denied access to the donated bicycles by their executive members saying these were given as appreciation for their work.

Maliamungu Kalil, the NRM chairperson for Koboko North division, who received one of the motorcycles stated that they had been facing challenges of transport but now the provision of the motorcyles coupled with the support of bicycles for the women council and LC chairpersons will have their mobilisation for the party eased.

Adaru Swadiq, commonly known as “AK-47” and the Municipal campaign agent for both President Museveni and Anite praised the minister for keeping to her promises made during the 2016 campaigns. He rallied for more support for more benefits.

The bicycles and the motorcycles Anite alleged were part of the President and her pledges made in the 2016 campaigns.

You are no match for Museveni – Mwenda tells Tumukunde

You are no match for Museveni - Mwenda tells Tumukunde