Frank Tumwebaze: Africa should encourage its techies to trade in knowledge products

Paul Kagame: ICTs have the ability to level the global playing field, unlock human capital and harness its full potential 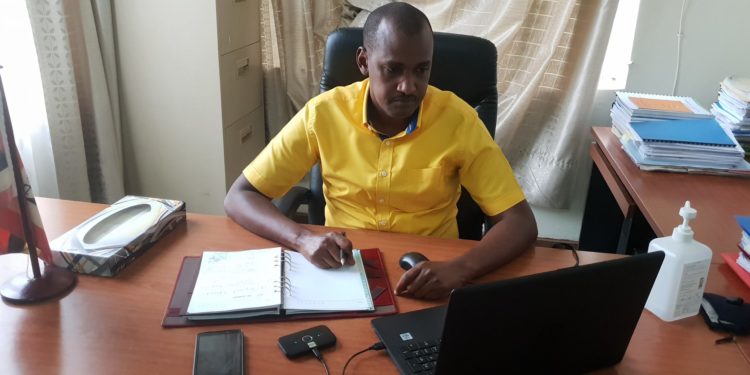 “Who will make Africa smart other than our knowledge products, and our innovators?” asked a Ugandan minister who has asked the continent to adopt a single digital market to give its people an opportunity to consume products made by its own innovators.

Mr Fr Frank Tumwebaze, Uganda’s minister for Gender, who was representing his president Yoweri Museveni at the 9th board virtual meeting of Smart Africa Summit chaired by Rwandan President Paul Kagame, said the One Area Network will enable Africans to live, work and thrive in the digital market.

Mr Museveni was not able to attend the summit because of his campaign commitments.

Tumwebaze said Uganda recognizes the importance of ICTs and has invested a great deal mainly in technological infrastructure with prioritization of broadband infrastructure.

@FrankTumwebazek I represented H.E @KagutaMuseveni today at the 9th board virtual mtg of @SmartAfrica chaired by H.E @PaulKagame. Glad that our country ‘s broadband connectivity footprint has increased. Was able to join the conversation sustainably from Kamwenge.

“That is why we are active members of the smart Africa initiative”, he said, adding “We have pursued a digital vision for our country with relevant policies to instruments like the national broadband policy of 2018 which recognizes broadband infrastructure just as another important utility infrastructure the way we do for electricity, water and others.”

He called for an Africa with one area network to enable integration of voice, data and e-commerce.

“My president requested the Secretariat to take this up and discuss it with our relevant government institution,” Mr Tumwebaze told the e-meeting from the comfort of his home in Kamwenge district.

Uganda is also calling for an end to Radio and Tele-communication spectrum interferences. He said citizens in borders areas often get interferences which turn their communications gadget on roaming, costing them exorbitant charges.

“I am happy ITU is participating in this conversation. We need to see how we mitigate these interferences because you find that somebody at the border either a Uganda or Kenyan side, or a Rwandan on the other side of Katuna will be having interference on their side, suffering roaming charges.

“We could address both, the one area network integration as well as the issue of mitigation of radio and spectrum interferences.”

Mr Tumwebaze said the Smart Africa secretariat should also look at Peer Learning in Africa’s digital journey. He said there is a lot countries can learn from others as well as well as use each other’s products.

“We have made a number of digital milestones. Rwanda is ahead in some areas, Madagascar was being pointed as an example in pushing down costs of data, through the secretariat we could promote peer learning.

With Africa having a lot in common, there was no need to reinvent what another country has innovated. Instead, it was proper that other countries adopt best practices or innovations from peers.

“We know how has this country managed it and we benchmark and we move together as a block,” he said, explaining African countries should recognize each other’s knowledge products.

Tumwebaze emphasized that an innovator in one country can solve the same problems in Uganda, Rwanda, Kenya, and other countries.

“We would want to see how we promote consumption of each other country’s knowledge products.”

Through the Smart Africa secretariat, Tumwebaze said Africans can promote and allow trading of knowledge products across borders with ease.

President Paul Kagame, the chairman of the Smart Africa board is quoted the website saying, “The creation of Smart Africa is a testimony of our resolve to put in place the right policy and regulatory environment that will encourage partnerships, entrepreneurship, job creation and knowledge sharing. Our move towards an ICT and knowledge driven economy together intends to increase Africa’s competitiveness in the global economy. ICTs have the ability to level the global playing field, unlock human capital and harness its full potential.”

“Africa, considered to be the youngest continent in the world, has a great need for a catalyst platform in order to transform itself into a single digital market, for that to happen, we have to connect our countries and interconnect cross-borders, innovate our approach of social economic development, in order to transform and propel our continent towards a knowledge based economy in this 21st century, and these represent the challenges that Smart Africa will have to take on. I invite all stakeholders to join us in this endeavor,” Mr Lacina Koné, Director General of the organisaiton says.