by Fredrick Kalyango
in Sports
11 0 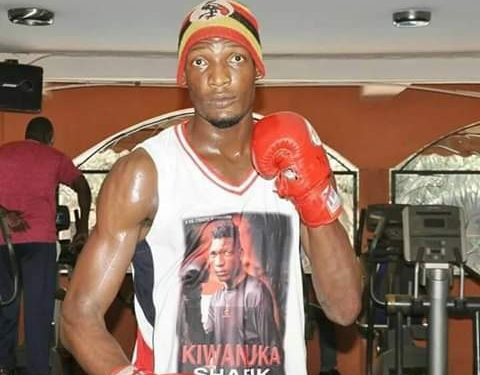 WBF Africa heavyweight Champion Shafic Kiwanuka AKA ‘Killing Machine’ is back  in the ropes for another high profile tittle contest.

Kiwanuka, who punished Zimbabwe’s Thamsanqua Dube in December 2019 to clinch a maiden African tittle, is set to stretch his jab on Egypt’s Abdallah Samy Aly Ibrahim’s body on May 29, 2020 at International University of East Africa (IUEA) Auditorium in Kansanga.

Great Strikers International the boxing promotion company that is behind Kiwanuka’s dream yesterday broke the news as their target is to see him turn into a world championship and all these fights are just pass ways to his dream.

Kiwanuka, a language student at International University of East Africa and also an old boy of Kampala Boxing Club could not hide his feelings about this fight.

“l am ready as you always know, this is a killing Machine. Am ready to rumble am in shape and prepared to show my skills. My fans come in large numbers because I am better than before, I have trained and am still training too hard with my coach Abdul Tebazalwa the tittle is for us”, Said Kiwanuka

Kiwanuka has a clean record of three wins in three of which the two of them are a nightmare to his opponents where he crashed them in the first round before winning the third one  by unanimous decision.

His opponent, a29 year old Egyptian is the National heavy weight Champion winning this tittle in 2019. He has had five fights winning four and drawing one but he is yet to putan opponent on canvas.

The Vice Chancellor IUEA Dr Emeka Akaezuwa said as the University has made it a habit to promote sports.

“ IUEA has and shall continue supporting sports, Kiwanuka is our student and made us proud when he won an African tittle. He is a talented and enduring boxer and we have a lot of hopes in him. Come and support him in May he won’t disappoint”, Said Emeka.

The 2008 All Africa Olympic qualifiers Bronze medalist who turned professional in 2014, isnow a feather weight National Champion with three fights wining all of them.