by watchdog
in Conversations with, Op-Ed
0 0
0

James Bakama, you an old man left with nothing to prove but retirement and New Vision should do save you further embarrassment and offer you one. You belong to the gone-by generation of journalism. The one that had the monopoly to ransom persons in positions of influence and be paid. I have refused pay any journalist and the earlier you realise that I cannot be your target the better. I am not going to call you for anything. I am not the one who chased away many of your potential targets, it is the technology and times that have shifted.

I have watched the series of syndicated and intendedly bungled information, a katogo of opinions and stories that you have been running since I became FUFA President. You are a total embarrassment not worth your age.

The FIFA funds are stringently audited by FIFA every year to the detail of a Dollar by FIFA appointed international auditors.
FUFA has passed these audits with flying colours the reason why funds continue to come to Uganda unlike many other federations. You cannot police FIFA funds more than FIFA. Byotategera byesonyiwe.

“FUFA ignore FIFA on Football for Women”, Now seriously in your head you think FIFA is that stupid that it continues to fund FUFA that has ignored its instructions! 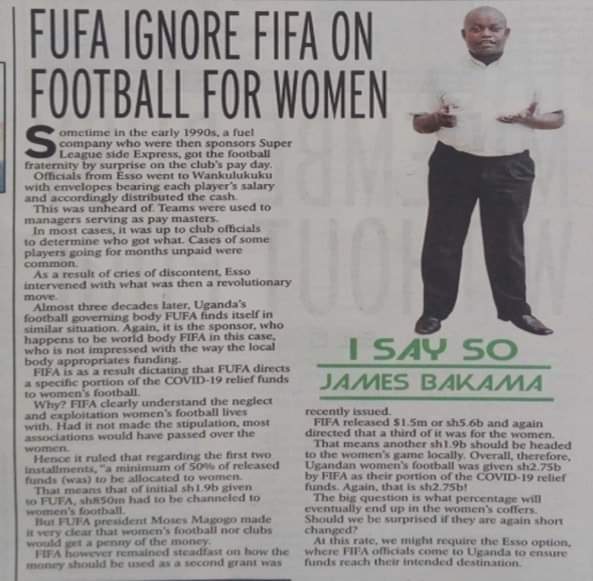 “A minimum of 50% of the released funds for Women”, a journalist worth any salt, can you quote any communication or authority on this lie!

“But FUFA President, Moses Magogo made it clear that women football nor of the clubs would get a penny of the money” this is only sentence you wanted in the article. You have no mission accomplished without my name involved. I challenge you Bakama to quote me anywhere I made such careless declarations inconsistent with the facts on ground. Are you aware, FUFA has created a league system of Women Football now going to 3 league divisions and the costs we undertake thereat? Are you aware three national women teams are active week-in, week-out and at the verge of qualifying the world cup? Champions of COSAFA and CECAFA? You think that was not a penny? Do you know the cost of a managing a national team of any age bracket?

Are you even aware FUFA is spending over 1.4bn Uganda Shillings in the Uganda Premier League alone? Are those not clubs?

Now what is disturbing is the continued attack by Bakama and other journalists from the Vision Group media outlets going unabated. Are there any editors left in New Vision? We are mindful that our complaints to the authorities inclusive of Robert Kabushenga himself have not yielded any help right from the head himself. Is it an editorial policy to malign the FUFA Brand?

New Vision is a Brand and so is FUFA. We have fought a lot to make FUFA the brand it is, and we are not going to sit down when our efforts are being washed down by un ethical and unprofessional persons like this. FUFA has the ability to protect its brand against the New Vision attack by all means available. Over to you Robert