by Watchdog Uganda
in Health, Politics
2 0

Members of Parliament have been urged to seize available opportunities within the legislature in a bid to shape their oversight role and ensure its effective implementation.

He has also advised legislators to build public support for oversight noting that the public perception of Parliament’s integrity is key for the success of their role.

“The work and behavior of Parliament and parliamentarians determines the perception the public has of them. Internal ethics, standards and oversight activities you carry out should be made public,” said Oduman.

Oduman made these comments at the training seminar for Members of the 11th Parliament on Friday, 17 June 2022 at the Imperial Royale Hotel.

He highlighted committee meetings, plenary sittings and other public institutions as key spaces and tools for oversight to protect citizens’ rights and liberties as well as promote openness, transparency, equity and value for money.

He also urged legislators to cultivate a conducive parliamentary environment and attitude of leadership towards oversight and commit to regular evaluation of oversight capacity and performance.

Oduman, however, observed limitations in oversight related to the political will of MPs to among others, stick with values and principles against party discipline and constituency interests.

This, he said, could result in passive application of the parliamentary instruments of oversight.
“Passive oversight will not deliver on protection of citizens, provision of equitable public goods and services or provision of investment in human capacity for rapid and accountable human development,” Oduman noted.

He urged legislators to work hard in increasing the electorate’s media literacy rate which will make them more critical of the news they consume.

He added that being able to reach a large audience, the media is an enabler for democracy and can enhance better educated voters who will bring forward good national leaders.

“A good working relationship between Parliament and the media is a necessity in a multi-party system in which the ultimate beneficiary is the citizen, to whom both entities must be accountable,” Kulayigye said.

He highlighted the importance of distinguishing between public and private information that underpins how valuable or appropriate news content is defined.
“MPs and the institution of Parliament rely on the media to deliver their messages and opinions to the public. Relatedly the media plays an important role in monitoring and analyzing the work of MPs and Parliament,” he added. 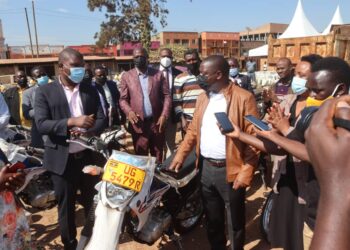 OFWONO OPONDO: Opposition MPs are screwing up themselves in lost causes