President Yoweri Museveni has revealed that he always uses the Holy Bible to respond to problems affecting him and Ugandans at large.

According to the President, through using the knowledge given to him by God through the Bible, he has been able to help Ugandans overcome a number of challenges like the locusts, floods, caterpillar and disease outbreaks.

“In the last two years, we have been having problems in Uganda and also in the world. However, my response to problems, I use the Bible. The book of Genesis, which some of the preachers touched on “You are created in God’s image”, imagine that I’m not like a cow or a goat, that I’m like God. Now I take that very seriously. So, whenever we have problems, my reaction is to face them using the knowledge, the power which God gave us. The problems we have faced; many of them have been solved, the locusts, the Caterpillars, the floods, the floating Islands then we had now Corona which we had to deal with and minimize death. Here we ended up losing 3,600 people who died from Corona but even the people who were infected were not so many. They were like 160,000 something like that,” he said.

Gen. Museveni made the remarks during the End of Year National Thanksgiving service at State House, Entebbe on Friday.

The Head of State commended Ugandans for always heeding to his advise whenever a country is faced by a challenge.

“I want to thank Ugandans for listening to our advise. That is what should be done because even in the Bible when God was punishing the Egyptians, He told the Israel people to smear blood on the doorsteps of their houses, then death would pass by and when they did it, people were saved. So, when we have problems, please listen to the solution. If you don’t listen to the solution then you will get the problem,” he urged.

“But I don’t think that we should imagine a time when there are no problems. I think that is incorrect because remember we were in the Garden of Eden living happily, our Jaaja Adam and his wife Eve, I don’t think at that time they had any problems but because of what they did, especially the woman, that woman, God expelled us from the Garden of Eden and said from now on you’re going to have a lot of problems and whatever you eat was to come from your sweat so please don’t behave like you are still in the Garden of Eden where there are no problems. Me I don’t want to be part of that because we were expelled in broad-day light.”

President Museveni also reiterated his call to Ugandans to get vaccinated against Covid-19 and be cautious against Ebola, saying that the battle against the pandemics is not yet over. 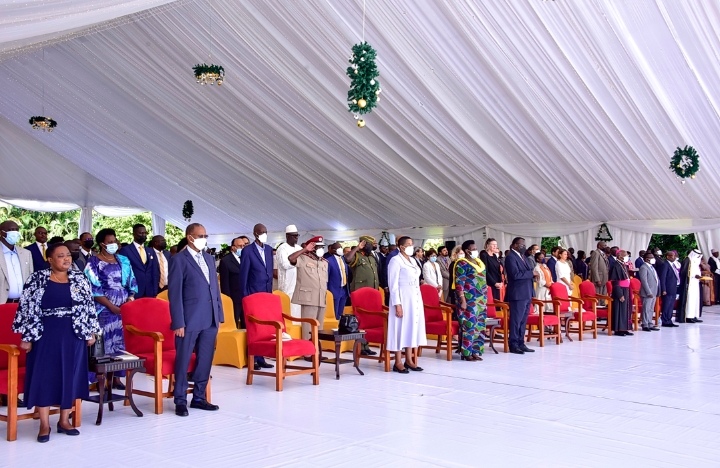 “Now for instance the problem of Corona you know what happened. We have now relaxed, we are saying that be vaccinated, be vaccinated at least two times and if in my group, 50 and above always have a booster every six months and if you don’t have those, we are not going to allow you in public meetings. Now, let people do that, Corona has already gone down in spite of the fact that so many people are not vaccinated, the vaccines are still there and we are begging people that please come. It’s now the problem of the behavior, some of the people don’t listen, I don’t know why. We have not had a case in the last two weeks. So both Corona and Ebola, we really have behavior problems, people not listening. The same with AIDS. If people listen, problems will be less,” the President cautioned.

On the issue of the current cost of living in Uganda, Gen. Museveni explained to the congregation that its coming from the problem of petroleum which is caused by the war in Ukraine and the fight among the West and the Russians.

“There’s oil but the Western countries stopped it to punish Russia and in turn you fellows get affected. But this will be solved because the fuel is there. It is just the fight among these people. For us we have been advising them quietly; talking to the Western group and also the Russians so that one will be sorted out. In fact, the price is coming down a bit. Now because of that, it affected the transport here. The bananas, although they are grown here, they need to be transported from the village to here, the prices went up,” H.E Museveni added.

The President also assured Ugandans that despite the effects of Covid-19 that left a number of industries like tourism in shambles, other sectors like agriculture are doing well, thus urging Ugandans to embrace them to improve their livelihoods.

“Now last year, we had an issue of drought and unreliable rain and that’s why we resolved that we must shift to irrigated agriculture. Agriculture not just based on rain only but also based on irrigation and there’s a big movement in doing that. By using gravity irrigation but also using solar powered water pumps which we are going to spread out in as many villages as possible so that we immunize ourselves against this erratic-ness of the rain,” he said.

“Therefore, I would like to encourage people not to be too pessimistic because it’s not correct since I’m a wealth creator and I’m not an arm chair talker about the economy. I’m a farmer, I have bananas, I have cows, I know what is happening in the economy. Some of the sectors of the economy are doing well. For instance, people are crying about food prices, yes, they have gone up but that means farmers are getting money so that is why more people should go into farming. I hear people are coming from Kenya to buy food in Teso. They come up to the gardens to buy. So that means, there’s money in agriculture. Therefore, put on spectacles to see where the problems and opportunities are.”

President Museveni also used the same function to warn criminals that they will be dealt with for trying to destabilize the peace and security in the country. 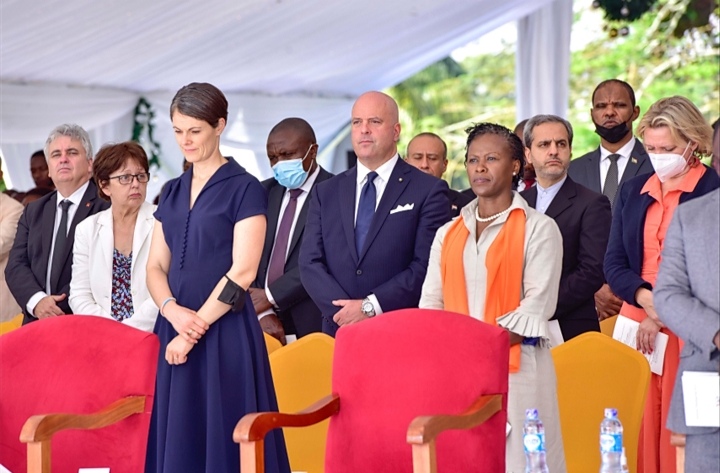 “There have been some crimes like attacking the police but many of them have been arrested. Some have been killed and many of them when we arrest them or they are killed, you find that somehow they are influenced by bad messages. That is why I’m thankful to people who are against people who spread bad messages. The structure in Uganda is very strong. Our security apparatus is very strong. There’s no way you can go and kill people and you survive. You will not survive and I would want to appeal to those groups who mislead these young people to really stop because these young people will die. My appeal therefore is on the messaging. Listen carefully to what we say because some of us have been on this effort full time not part time for the last 62 years,” he said.

On the other hand, the religious leaders prayed and thanked God for helping Ugandans to pass through the difficult economic challenges, prolonged drought among other challenges in the past one year.

Delivering the day’s sermon, Rt Rev. Johnson Twinomujuni, the Bishop of West Ankole Diocese told believers to always remember that God is there and He is the reason why they are on earth.
He advised them to live a life of usefulness aimed at adding value to humanity.

“There are people who have concluded that life is meaningless. May the Lord Have Mercy upon us. Life was not given to us just for pleasure, of course we should be happy but we should walk carefully as we approach the life that God has given to us. I personally hold that the reason why we were given this life is to glorify God and enjoy him forever but in a specific way in order for us to enjoy God and worship him and have a wonderful fellowship with Him,” Bishop Twinomujuni said.

“We need to think about how we can be useful. God gave us this life so we can make a contribution to humanity, to the wellbeing of humanity. Life is for usefulness. We should live to leave a legacy and that legacy should have two characteristics which include pleasing God and benefit humanity. Your life should add value, a lasting value,” he added.

Apostle Joseph Sserwadda of the Pentecostal Churches said, “You set us up, you prepared this nation to prosper and to grow from generation to generation. Thank you for sustaining our nation through political and economic hardships of the years past. We even wonder how you have kept us afloat during these protracted financial droughts and conflicts. Covid-19 raged our economic efforts and for two years we were held back to a near standstill with very little or no activity or no work. Oh Lord, Ebola has now come at the heels of the diabolic attack and threatens to destroy what is left. We therefore pray that the years we lost he recovered instantly.”

Sheikh Hamid Sserwadda Kyewalyanga, the Regional Assistant Mufti for Kampala for the general prosperity also revealed that it was paramount to pray and thank God for His continued protection and guidance to Ugandans.

“We continue to seek your refugee and protection,” he said.

“Commercial farming is the only way to transform society” – President Museveni

OWEYEGHA AFUNADUULA: Is Gen. Muhoozi Kainerugaba the leader of this generation as he claims?

OWEYEGHA AFUNADUULA: Is Gen. Muhoozi Kainerugaba the leader of this generation as he claims?