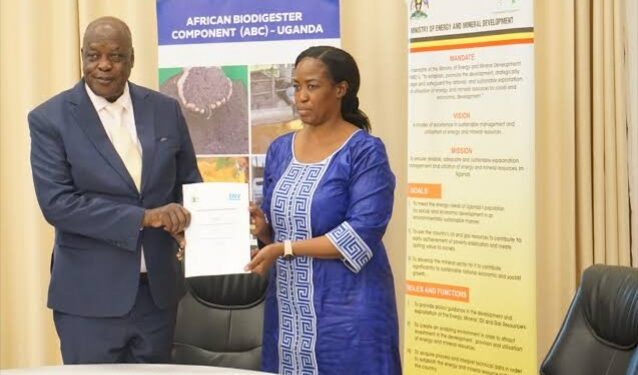 The Ministry of Energy and Mineral Development has launched the African Biodigester Component- ABC project which will benefit 40,000 Ugandans.

A biodigester system uses organic waste, mainly human and animal excreta, to produce biogas and fertlizer.The project will run from 2022 to December 2025, with funding of 13.7 million Euros, approximately 53.7billion, from the governments of the Netherlands and Germany.

He noted that the project will support the government’s efforts to reduce the heavy reliance on solid biomass fuels mainly charcoal and firewood which contribute over 82 percent of Uganda’s total consumable energy.

“This huge dependence on biomass resources results in destruction of up to 36.2 million tonnes of wood for energy and other purposes. As such 100,000 to 200,000 hectares of savannah and forestland are cleared per annum,” Lokeris added, “This is not sustainable!”

On top of fueling deforestation, Lokeris say the heavy use of charcoal and firewood pose health effects associated with indoor air pollution, estimated to lead to more than 18,000 deaths every year and also fueling gender based violence among women and children in the search for firewood.

As a result, he says the new Biogas Project will promote awareness about the need for renewable energy, provide 8,000 bio digesters to 40,000 Ugandans country wide and also offer incentives such as low cost loans to Biogas enterprises.

Joost Van Ettro, Head of Cooperation at the Embassy of The Netherlands, says there is a need for Uganda’s population of over 45 million to protect the environment. He says the new project builds on the results of the Africa Biogas Partnership Programme (ABPP) which was implemented for ten years with the support from the government of Netherlands as well. Uganda also benefited from the programme.

He says the new Biogas Project will introduce financing mechanisms to address high upfront cost of biogas systems, increase uptake of biogas systems through introduction of prefabricated biogas digesters and enable access to clean cooking for at least 40,000 Ugandans.

Isabirye says “without accelerating the uptake of renewable energy, increasing energy efficiency and promoting clean cooking, we will simply not achieve the sustainable development Goal Seven and other goals-Say poverty, health.Only one percent of households and institutions in Uganda use clean energy while 82 percent use charcoal and wood.”

He says the Ministry will provide policy guidance, technical support and supervision of the project to ensure biogas digesters of quality are installed by companies and households that can afford.

Hatimu Muyanja, an Energy Officer at the energy ministry, says it costs over shillings 4 million to construct a biogas system which includes a digester, expansion chamber, organic fertilizer component and pipes from toilets to the digester and pipes to the kitchen to provide gas for cooking.

He says those who cannot afford to install the biodigesters should apply to SNV Uganda. However, one must have at least a cow or goats or gardens to prove they have feed stock such as chicken droppings, cow dung, human waste among other items that decompose for the digester in order to be considered among the 40,000 people to get the 8,000 biodigesters from the project.

Muyanja says the shillings 54billion for the project will be disbursed through SNV Uganda and banks for biogas enterprises that meet requirements.

Maphosa says the organisation has supported over 40,000 Ugandans in the last ten years to acquire bio-digesters and “our objective is to support the government to scale up the use of biodigesters in the next three years.”

James Macbeth Forbes, the Country Director for the GIZ, says the beneficiaries need money to survive by making money and learning how to use biodigesters. He says the use of biodigesters in Uganda has so far recorded poor results due to lack of awareness and inadequate research.

The African Biodigester Component Programme Coordinator, Steven Von Eije, says the project is implemented in four other African countries of Kenya, South Sudan, Somalia and Burkina Faso. It aims at facilitating the construction and installation of 50,000 small-scale biodigesters by the end of 2025. It will result in energy access for at least 250,000 people and will also reduce yearly carbon dioxide equivalent emissions by over 180,000 tonnes in the five countries where it is being implemented.